Cover story: Is 'The Help' heroic or stereotyping? 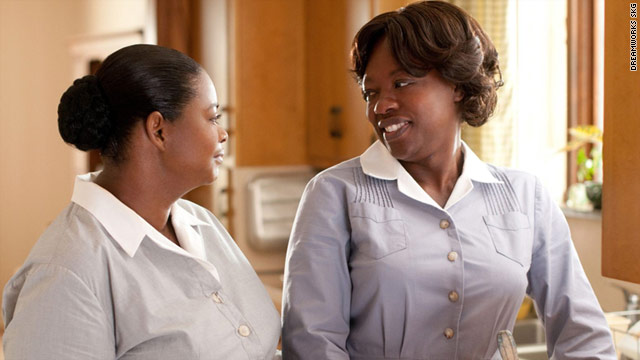 (CNN) -- When the National Association for the Advancement of Colored People complained about Hattie McDaniel's portrayal of slave housekeeper Mammy in the 1939 blockbuster film "Gone with The Wind," the actress is reported to have responded, "I'd rather get paid $700 a week for playing a maid than $7 for being one."

As the film "The Help" opens nationwide today, it faces the same challenges and criticisms of the best-selling novel of the same name.

The tale of a group of black maids in 1960s Mississippi who agree to share their lives via a book written by a young, aspiring, white female journalist has been hailed as a touching and moving portrayal of friendship and triumph, even as some have complained that the film offers the age-old Hollywood trope of the "white savior" who helps a group of beleaguered blacks who can't help themselves.

Even before the film's debut, there were calls to boycott the movie, which stars Emma Stone, Viola Davis, Bryce Dallas Howard and Octavia Spencer.

For director and screenwriter Tate Taylor, the controversy surrounding the movie is much ado about nothing.

"What I've discovered is that many people who (criticize "The Help"), usually about 80 percent, have not read the book, which I find a little frustrating," said Taylor, who adapted the screenplay from the novel written by his childhood friend Kathryn Stockett.

Janney: behind the scenes of 'The Help'

"Frankly, Skeeter (the main character, through whom most of the novel is told) is not 'the great white hope' in the book or in the movie," Taylor said. "The people in charge of their lives are Aibileen and Minny (the black maids), so they therefore teach Skeeter and in turn teach Jackson (Mississippi)."

'The Help" not only raises hackles because of the painful era it represents, it raises questions as to how far black actors have come in Hollywood.

During what is known as the Golden Age of Hollywood from the 1920s to the early 1960s, African-American actors were often relegated to roles as domestics. One of the most famous of those roles -- that of Mammy -- won McDaniel the first Academy Award for an African-American in 1939 for best supporting actress.

Spencer plays saucy maid Minny Jackson in "The Help" and said that if the roles in her film were at all like those of the past, she would be "mad as hell."

"This isn't the same thing that you have always seen," she said. "These women are proactive in bringing about change in their community. They may not be the most eloquent speakers or be the most educated, but they are heroic, and I think they're positive images that we have never seen."

Davis stars as Aibileen Clark, the maid whose decision to cooperate with aspiring writer Eugenia "Skeeter" Phelan the novel is centered on.

Davis (who in 2008 was nominated for an Academy Award for her brief role in "Doubt") said she understands that the film's time period is an uncomfortable one for many in her community, but it is her hope that the audience can see beyond the maids' uniforms and into their hearts.

It's through the ordinary people that we get a glimpse of who we are.
--Viola Davis, star of "The Help"
RELATED TOPICS

"I think that oftentimes, we as African-Americans are so ashamed of the slave, of the maid, and all that we were and not understanding that it is on the backs of the slaves and the domestics that have brought us to where we are," she said. "It's through the ordinary people that we get a glimpse of who we are."

Spencer said she views the film as a work of appreciation to just those people.

"This is one of the first times that I've seen domestics or people of lower means from that era have a voice and the story has been told from their perspective," Spencer said. "I've never read something where we weren't just plot points and our characters had lives outside of the kitchen."

Sarah Sluis is assistant editor and staff writer for Film Journal International, where she wrote about "The Help." In her story, Sluis notes that "There's also an aura of liberalism in these tales of racial harmony, which have made recent films like 'The Blind Side,' 'Avatar' and 'Gran Torino' favorites among audiences and the Academy membership. But there's also a dark side. Such tales carry at least a whisper of paternalism and insinuate inferiority."

"It's nice to have that Emma Stone character trying to instill equality in the 1960s community, when in reality, that wasn't really the way things worked out," Sluis said. "There were people who fought for civil rights and were abolitionists back in the day, but I really don't think that's how history played out most of the time. And yet, it's a dominate narrative that Hollywood likes to tell."

Sluis said she believes the movie worked better than the book, in part because of the powerful performances of Davis and Spencer.

Dolen Perkins-Valdez is author of the novel "Wench," which chronicles the lives of four slave women who are their masters' mistresses. She said Stockett faced a challenge because the issues of race and race relations are still so raw in this country.

Couple that with the minority number of black filmmakers in Hollywood, and there is bound to be criticism, Perkins-Valdez said.

Like the novel, the film does has its core supporters. Delta Sigma Theta Sorority Inc., the nation's largest association of African-American women, released a statement in support of the movie. Three cast members -- Cicely Tyson, Aunjanue Ellis and Flo Roach -- belong to the sorority.

"It is a story that is painfully honest, yet incredibly uplifting and inspiring," said Cynthia M. A. Butler-McIntyre, national president of Delta Sigma Theta Sorority. "It is a testament to the lives of so many African-American women and offers a realistic depiction of what can happen -- good and bad -- when you make the decision to stand up and speak out. The film also offers a snapshot of the harsh reality of race relations in America while also addressing the unspoken power and beauty of relationships among all women, regardless of race."

Taylor said he tried to maintain as much of the novel as he could in adapting the film.

He said the book was born out of a conversation Stockett had with Taylor on September 11, after the attacks on the World Trade Center and the Pentagon. Stockett was longing for Demetrie, the black maid who took care of her when she was growing up in Jackson in the 1970s.

Likewise, Taylor had a black babysitter, Carol Lee, whom he calls his "co-mother." The director said both he and Stockett were intrigued about the lives of those women, who had such an impact on their lives outside of the relationship of caregiver and child.

That's why Taylor rejects the argument that the story seen through the eyes of a white author, Stockett, is a skewered one.

"It boils down to this: Katherine had a right to tell the story because this woman, Demetrie, made Katherine the woman who she is," Taylor said. "I get the criticism based on past works of fiction and in film, but I just would challenge everyone to leave their judgment behind and take a peek."

Davis agreed. She said if movie-goers want to be supportive of black actors and black film projects, they will see the movie.

"The reason to see it is because of Octavia Spencer, Cicely Tyson, Aunjanue Ellis, Roslyn Ruff, Nelsan Ellis," she said. "This is probably the only film by a major Hollywood studio that has that many black faces."