Review: Hail, Caesar! 'Rise of the Planet of the Apes' delivers

By Mark Rabinowitz, Special to CNN 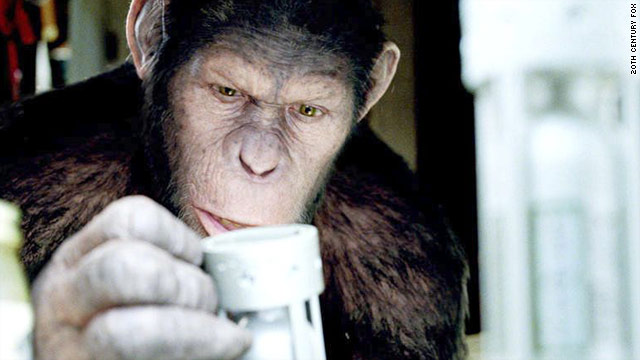 (CNN) -- If you've ever wondered what happens when you mix a sentient gorilla with a helicopter, look no further! This and many other questions are answered during the course of Rupert Wyatt's compelling and invigorating "Rise of the Planet of the Apes."

And if you're looking for a summer popcorn film that won't talk down to you, you've found it.

I went into the screening of "Rise" with low expectations, and there were many reasons for my trepidation. "Congo" would be one of them ("Oh, no! The bad apes have the crystal lasers!") and pretty much every other misguided reboot or "intelligent animal" movie since the original "Planet of the Apes" series ended in 1973 would be the others.

Thankfully, you don't have to worry, as Fox's restart of the legendary franchise delivers on almost every front. To my surprise and delight, "Rise" is what had become a summer movie rarity: fun, engrossing and a way to escape the heat without being treated like a 10-year-old boy.

Believe it or not, "Rise" is also reasonably intelligent. Well, as intelligent as is possible, given the subject matter. It is, after all, basically a popcorn flick.

With several nods and winks to the previous franchise, "Rise" clearly knows which side of its bread is buttered, and fan boys and girls will not be disappointed. References are made both verbally and visually to the original, but don't worry if you're not (yet) a fan of the classic. No prior knowledge is required.

The film opens with Will Rodman (James Franco) working in a biotech lab at a company called Gen-Sys (get it?) developing what he hopes is a cure for Alzheimer's by experimenting on chimpanzees. You see, Will's father (John Lithgow) has the disease, and Will's hellbent on curing him.

As this is an "animals in a lab" movie, something is bound to go wrong.

In this case, one of Will's subjects, Bright Eyes, seemingly goes berserk, and Will's project is shut down on the eve of its approval for human testing. Not allowing himself to be constrained by anything as trite as rules or ethics, Will not only takes his research home with him (he adopts an infant chimp that has been exposed to the experimental drug), but he also begins treating his father Charles with the serum.

Here is where the film takes off, both emotionally and technologically. Unlike the animatronics of old, the special effects of "Rise" are astonishing. While the film ostensibly stars Franco, Lithgow, Freida Pinto and several other noted actors, the real star of the show is Caesar, the digitally created chimp brought to life by Weta Digital -- the company that sprang to prominence for its work on Peter Jackson's "Lord of the Rings" trilogy -- and by actor Andy Serkis.

Serkis (Gollum in "Lord of the Rings"), who has become the go-to guy for performance capture roles, plays Caesar from infancy to adulthood, growing from a vaguely Curious George-like childhood into your everyday, sullen, teenaged hyper-intelligent ape and eventually into an adult.

Caesar is a complex character, a first-of-his-kind artificially created leap in evolution, and as such, has a lot on his mind, all of which Serkis has to portray through movement and facial expressions. It's an extraordinary achievement and is the heart of the film

As with any "wild animal lives with human" story, things go off the rails. Will's obnoxious and confrontational neighbor (David Hewlett, playing against type) reacts badly to a young Caesar trying to play with his daughter and later assaults an Alzheimer's-addled Charles when the latter tries to drive the former's car and damages it. Caesar sees Charles as a member of his family and defends him, attacking the neighbor.

(How Caesar lived with humans for so long without someone calling the cops is one of a few serious suspensions of disbelief in which one must indulge.)

Animal control is called, and the second act begins with Caesar incarcerated in what is supposedly a paradise for wayward simians, but as anyone who's seen a movie knows, is basically a maximum-security prison for apes.

Here, Caesar begins to suspect that not all humans are as kind as his "dad," Will, and that maybe it's his job as a super-intelligent chimp to balance the scales a bit.

The scenes in the chimp prison ("Esc-Ape From Alcatraz," anyone?) are where our empathy with Caesar and his fellow primates turns to full-on "Get those guys!" blood lust as the evil jailers -- played by a criminally under-used Brian Cox and his less-than-humane son, played by "Harry Potter's" Tom Felton -- routinely abuse their charges, even selling some to Gen-Sys.

No one likes to see animals abused -- especially ones with thumbs -- and It's here that Caesar begins his transformation into a chimp Che Guevara.

The tension of "Rise" increases so gradually through the film's first hour-plus that before you notice it, you're on the edge of your seat, virtually gagging for the the promised ape revolution. And when it comes, you won't be disappointed. Here is where Weta's genius combines with Wyatt's direction, Andrew Lesnie's cinematography and Patrick Doyle's score to deliver a rousing finale with Serkis' Caesar at the forefront.

The original "Planet of the Apes," while clearly a sci-fi film, was also a thinly veiled 1960s-style allegory about civil rights and the rising threat of nuclear proliferation. Much of that is lost here, although new "lessons" about the dangers of tampering with nature are reasonably constant.

That film's stunning revelation at its climax is one of the most famous scenes in movie history, and since we've now been treated to a prequel (and assuming this is the start of a new franchise), the filmmakers are going to have to work pretty hard to find an equally compelling ending to the next film, since we already know the "surprise."

Here's hoping they manage it.

"Rise of the Planet of the Apes" is rated PG-13, and despite how cute some younger children might think chimps are, this is not the film for them. There's far too much violence for the younger set.