A Casey Anthony movie? Not so fast, Hollywood says 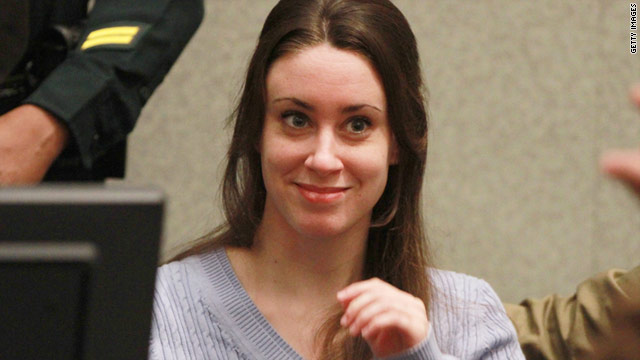 After Anthony's acquittal on murder charges, outrage is making Hollywood rethink the wisdom of putting her story on the screen.
STORY HIGHLIGHTS

Three days remain until Casey Anthony is released from jail. Tune in to HLN's "Nancy Grace" on Thursday night for more on Anthony's future and what she'll be up against once she's out. Plus, don't miss Piers Morgan's live interview with Nancy on "Piers Morgan Tonight" at 9 p.m. ET Monday on CNN.

(CNN) -- Not so long ago, the idea of a Casey Anthony movie seemed like a certainty. How could Hollywood resist the chance to adapt the sensational murder case?

After all, producers didn't hesitate to turn the Amanda Knox, Natalee Holloway and Clark Rockefeller sagas into TV movies. And interest in those cases pales compared to Anthony, whose trial became the must-see television event of the summer.

But the public outrage over Anthony's acquittal on murder charges is making some in the industry rethink the wisdom of adapting her story to the screen.

"Anyone who pursued a movie based on these events, especially right now, will face some immediate backlash," said Matthew Belloni, news director for The Hollywood Reporter.

"The nerve is so raw on this and so many people are so outraged by the verdict that anything that is seen as an attempt to exploit this, especially if the family is involved, will be seen as a negative by most of the people who followed the trial," Belloni told CNN.

The cable channel Lifetime would seem the logical home for an Anthony movie -- it aired the Knox, Holloway and Rockefeller films, and it's in production on a movie about murder suspect Drew Peterson (with Rob Lowe in the lead).

The mere hint of a connection to the Anthonys has sent Hollywood talent agencies diving for cover. When an erroneous report circulated last week that William Morris Endeavor had signed Anthony for representation, the agency was inundated with protest calls. It quickly sent out word denying the report.

And Paradigm, another big talent agency, signed Anthony's lead attorney, Jose Baez, for representation, only to "un-sign" him several hours later after facing a drumbeat of criticism.

Actress Niecy Nash, who told CNN she watched "every minute" of the trial, is among those angered about the prospect of Anthony cashing in by selling the rights to her story.

"If that girl [Anthony] makes one dime off of the death of her child, I'm just telling you that I feel like America is going to be like, 'we are so done with you!' " she told CNN.

"I'm upset because the opportunity to profit from a tragedy is laid out for this girl on a silver platter," Nash said.

"I do think there should be a movie made" about the case, Cooper said. "But I want the person that does the movie to be a neutral person, because that way, we'll get more of a balanced movie, versus Casey Anthony doing the movie, because then it'll slant her way, and it's going to be filled with even more lies."

The possibility of a movie has inevitably spawned water cooler talk in Hollywood about who should play Anthony.

Speculation about casting the movie may be more than just idle chatter. Some people remain convinced there will be a Casey Anthony movie, including The Hollywood Reporter's Matthew Belloni.

"You've got to believe that something this high-profile, something that everyone is talking about ... that eventually, this will become a movie," he told CNN.

The surprising verdict in the case only makes that more likely, Belloni said.

"Then you have this outcome that many people can't reconcile with the facts," he said. "That conflict presents good fodder for a film."