Review: 'Transformers: Dark of the Moon' not as bad as the last one 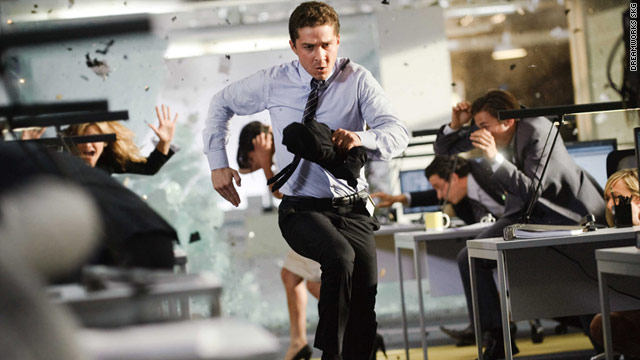 (CNN) -- This time last year we saw a lot of excited articles about how "Inception" showed there was an audience for a smarter, more conceptual blockbuster. But hold the front page: Michael Bay is out to prove there's a bigger audience for brainless bombast and nonstop mayhem.

Even Bay now admits he's set himself a very low bar, but yes, it's true what you may have heard: "Transformers: Dark of the Moon" is an improvement on "Revenge of the Fallen." It's a lousy movie, but at least it's a lousy movie with a serviceable story, killer CGI and an action climax that goes on forever (at least an hour). An awful lot of people like that kind of thing -- my kids included.

Like "X-Men First Class," the latest Transformers movie goes in for a spot of fantastical sixties revisionism.

Screenwriter Ehren Kruger reimagines the Space Race as a covert response to Autobots on the moon, and Bay audaciously drafts in Presidents Kennedy and Nixon, as well as Neil Armstrong and even Buzz Aldrin in the flesh to sell this appealingly lunatic conspiracy theory.

The script's bold outlines don't play so well on a bald scene-by-scene basis. Kruger's dialogue leaves even such experienced professionals as Frances McDormand and John Malkovich high and dry, and Bay seems to have no interest in reining in the performances of John Turturro or Ken Jeong, whose manic mugging is more surreal than comic.

Comedy, which relies on timing and nuance, remains Bay's most glaring deficiency, though no one seems to have pointed this out to him. That, and a sensibility that's still essentially adolescent in its puerile sexism and homophobia. As for Huntington-Whiteley, she makes Megan Fox look like Meryl Streep.

At least Bay has reconsidered his signature chop suey editing style to adapt to 3-D. The cutting may not be coherent (there's a neat bit involving some skydivers, but quite where they land is a mystery), but the pacing is more measured and this is one of the relatively rare blockbusters where the third dimension enhances the experience, giving crunch and punch to the numerous bot battles.

What's more, Bay has put the gargantuan budget on screen. He's an unabashed maximalist. Before he's through he's poked fun at a third president (Obama) and decapitated a fourth (the Lincoln Memorial), he's trashed downtown Chicago and pulled in not one, not two, but three worlds for extra oomph. The relentless climax practically batters you into submission.

The CGI is more extensive and more textured than in the previous films, and Kruger has come up with a couple of authentically dramatic scenes for the Autobots. But if Bay is hands-off with his human actors, he's even less interested in his eponymous stars.

And that's been the big problem with these "Transformers" flicks all along -- the mounting suspicion that Michael Bay finds such kids' stuff beneath him. He doesn't "get" the Transformers, has no interest in kids, and so he defaults to what he is good at, which is blowing everything up. And the kids love him for it.