More 'Bridesmaids' coming down the aisles? 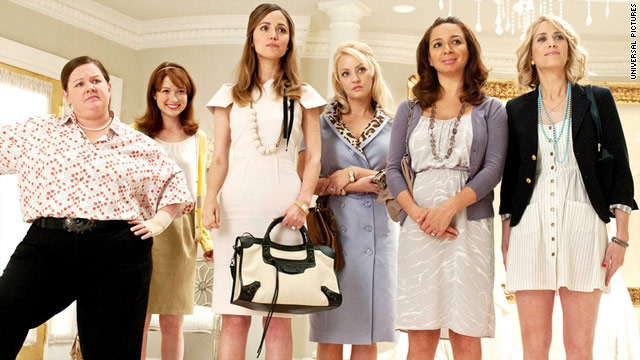 (CNN) -- "Bridesmaids" doesn't have a makeover scene. There's not a George Clooney or Matthew McConaughey to save the day. And no one sings into a hairbrush or dances around in a kitchen.

Instead, the film earns its laughs with toilet humor and a surprise scene-stealing star, Melissa McCarthy, whose character Megan slaps the depressed female-lead back to reality.

"Bridesmaids," written by and starring women, has grossed more than $140 million worldwide since its May 15 release. Factor in the flick's $32 million budget, and its box office success becomes even more apparent. "The Hangover Part II," on the other hand, which raked in $86 million its opening weekend, cost about $80 million to make.

In Hollywood, success is measure by "how many people want to make a movie just like you made," said Melissa Silverstein, the founder and editor of womenandhollywood.com.

Think back to "Friends" -- 20-somethings living in New York, hanging out at a coffee shop. "Everyone wants a magical formula," Variety managing editor Stuart Levine said. "And people will try to copy what made "Bridesmaids" funny."

And Silverstein and Levine agree: The "Bridesmaids" copycats are on the way.

"People were really hungry for this," Silverstein said. "(The movie) touched a cultural nerve. People were excited to see women on-screen cheering for each other -- not hating each other."

There are plenty of conversations in Hollywood right now about the success of this film and R-rated female comedies in general, Silverstein added. But she pointed out that in 1991, "Thelma and Louise" was a success culturally and prompted the same discussion, but nothing ever spawned from it.

Female-centric films are held to a much higher standard than films featuring predominately male casts, Silverstein said. Therefore, she added, the risk is greater, but then so is the reward.

Ellie Kemper, who plays redheaded newlywed Becca in "Bridesmaids," says that while she doesn't find it difficult to be a woman in comedy, female-fronted studio films are few and far between.

Some of the most recent female-centric flicks include "Sex and the City" and "Sucker Punch," which had a disappointing box office run after hitting theaters in March. But still, smart comedies starring women are relatively uncommon.

"Women can be funny. They can be gross at times, but if you don't have heart and characters that work, it's not going to fly," Silverstein said.

Kristen Wiig, Maya Rudolph and Melissa McCarthy have been successful in their careers, but they're unconventional leading ladies by Hollywood's standards, Silverstein said, adding, it's not like Cameron Diaz opening "Bad Teacher" -- out Friday.

"There are few female stars that can open a movie," she said. "With summer movies, women tend to be window dressing."

Each of the characters in "Bridesmaids" have significant parts, Silverstein added.

Wiig and fellow writer Annie Mumolo achieved this by focusing on the women's friendships and by giving "everyone a chance to kind of shine, Kemper said.

The writing really made the film, Levine said. Had a man tried to write their story, it might not have worked as well, he added, while saying there are men capable of writing for women with no problem.

"(The movie) was really about Kristen's story, about not being lonely not having a good job," he said. "The frustration of seeing her best friend get married. Men can't get into the headspace that a female writer can because it's her personal story. Though they might think they can -- women would say (something) would never have happened."

Tim Stack, a senior writer at Entertainment Weekly agrees. " 'Bridesmaids' feels real and authentic. Women will show up when it's something that speaks to them and doesn't play down to them."

Kemper, who also plays Erin Hannon on "The Office," said she'd love to do a "Bridesmaids" sequel, though she hasn't heard anything about it yet.

"I really hope they make one," she said. "Primarily so I could work with those women again. I don't mean to sound corny, but I could be stuck in a hotel room with those women for a week and never stop laughing."

Where are they now?

Annie Mumolo
Co-writer and producer Mumolo, who appeared in the film as Wiig's terrified airplane seatmate, recently sold a pitch to Paramount with Melissa McCarthy about stealing the Stanley Cup. She'll also develop a project for ABC Studios, according to The Hollywood Reporter.

Kristen Wiig
The "Saturday Night Live" cast member will keep us laughing in 2012's "Friends With Kids." She'll star alongside her "Bridesmaids" bestie Maya Rudolph, as well as her on-screen loves Chris O'Dowd and Jon Hamm in the Jennifer Westfeldt-written comedy.

Maya Rudolph
The former "Saturday Night Live" cast member will appear in the upcoming comedy "Friends With Kids," as well as a new NBC comedy, "Up All Night." The fall 2011 series, starring Christina Applegate and Will Arnett, features Rudolph as Applegate's fun-loving boss.

Melissa McCarthy
The "Mike & Molly" star, who sold a comedy pitch to Paramount with Mumolo, will also star in the flick.

Rose Byrne
The Emmy-nominated "Damages" actress, who currently appears in "X-Men: First Class," will return to her role as Ellen Parsons for the drama's fourth season.

Ellie Kemper
The Princeton grad is in New Orleans filming 2012's "21 Jump Street" alongside Johnny Depp and Jonah Hill. She'll continue to appear on "The Office" as Erin Hannon when the show returns for its eighth season. Kemper also said she'd like to develop a script for herself in the future.

Wendi McLendon-Covey
McLendon-Covey, who played the hilarious cougar-type Rita in the film, will soon appear in "Fully Loaded."