Review: 'Page One: Inside The New York Times'

By Mark Rabinowitz, Special to CNN 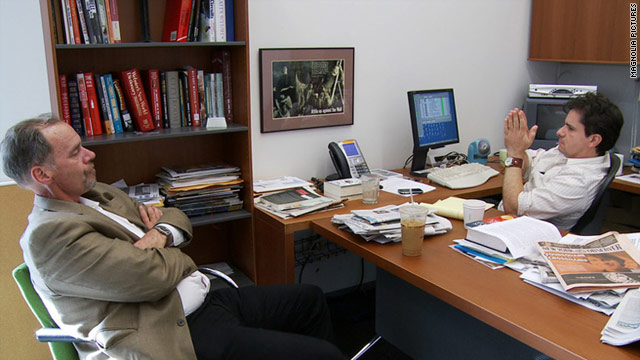 New York (CNN) -- Documentaries are often unfairly saddled with the same "good for you" baggage that, as children, we ran from as fast as our little legs would carry us. That a film can be both entertaining and informative is a concept often ignored at the multiplex, and the idea that documentaries are just as much "real" movies as dramas, comedies and war films is often derided.

The fact is, labeling a film such as "Page One: Inside The New York Times," the excellent new documentary from director Andrew Rossi (written with Kate Novack) as "important" ironically runs the risk of alienating potential audience members so instead, let's just say that it's a movie with heroes, villains (sort of), humor, anxiety, anger, hope and conflict, that just happens to be true. It also happens to be a film anyone who cares about the future should see.

An engrossing "fly-on-the-wall" look at one of the most influential and important newspapers in the history of the printed word, "Page One" takes the viewer deep into the cubicles of the "newspaper of record" during a particularly self-referential period in the history of journalism: the perceived beginning of the end of the daily newspaper.

Opening with a series of clips bemoaning the 2009 closure of several of the nation's largest and most-respected newspapers, including Denver's Rocky Mountain News (1859-2009) and the Seattle Post-Intelligencer (1863-2009, continuing as online only), the film quickly zeroes in on the "Old Grey Lady" herself, The New York Times.

Only a few years off the 2007 opening of its new Times Square headquarters (guess where that famous landmark got its name) the paper is in trouble. It is losing money and threatening to close The Boston Globe, one of the papers it owns.

Like any good documentary of its type, "Page One" sets us up with a few main characters to follow, including media columnist David Carr and his editor, Bruce Headlam.

Carr is built for this treatment and is a joy to watch. While the entire film is engrossing, it truly comes alive when he is on the screen. Embodying the hard-nosed and salty traditional journalist, Carr is what we all think of when we hear the phrase "newspaper man."

Devoted to his craft and his paper, old school and honest, prone to calling it like he sees it (and dropper of the occasional and very well-placed F-bomb) Carr seems to see it as part of his job to evangelize for the institution of printed news and, as he puts it, he will "vaporize" anyone who says the Times is in danger of collapsing.

A former crack addict turned award-winning journalist and devoted father, Carr is the perfect "host" for our trip through the odd world of modern news reporting.

To listen to the new media mavens (several of whom are heard from in this film) print news is dead, and one can almost see the town crier shouting, "Here ye! Here ye! The newspaper is dead, the Internet is king. Long live the King!"

Gawker's Nick Denton even goes so far as to say that "(The New York Times) may be important, but nobody wants to read them." That's a theory yet to be truly put to the test and, as "Page One" points out, many of the stories that appear in online outlets such as Gawker first appeared in the pages of ... The New York Times.

A far more important, one could argue critical, point made by some in the film is that without serious, mainstream newspapers such as the Times, The Washington Post, The Guardian in the United Kingdom and a few others, who is going to be reporting the news? Do online outlets such as Gawker, The Daily Beast and the The Huffington Post have the expertise and commitment to be a viable fourth estate? Are citizen bloggers truly equipped to serve the public? Do the increasingly nonhard news reporting TV networks have what it takes?

One of the more interesting parts of the film involve Carr's investigation into the collapse of the Tribune Co., which begins as a rather straightforward (yet still shocking) case of corporate mismanagement, cronyism and betrayal of journalistic ethics and devolves into a sordid tale of widespread sexual harassment. Here is where Headlam's editor serves as the perfect foil to Carr's dogged reporter, acting as the buffer between a giant media company's attorneys and an equally giant media company's reporter. Without these seasoned people in their respective roles, wither investigative journalism?

As luck would have it, Rossi was filming in the newsroom the day that NBC announced the "end" of the Iraq war, basically ignoring the fact the Pentagon had declared no such thing and that thousands of combat troops remained in Iraq. In a particularly telling moment, the Times editors are seen watching the report and discussing whether it was real or whether NBC had essentially created the event for TV.

In watching "Page One" and seeing the various new media types seemingly giddy at the prospect of taking over a news sandbox that they are arguably ill-equipped to handle, one is tempted to recall two quotes by two poets born roughly 1,850 years apart: