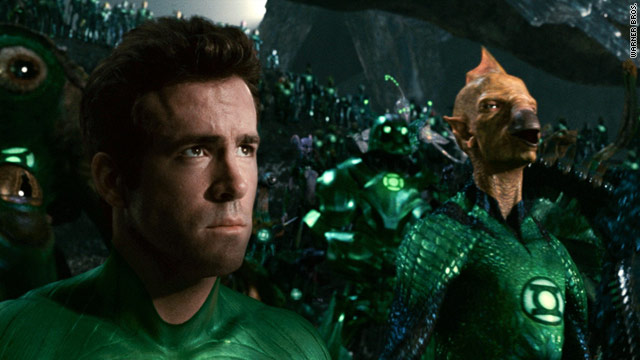 (CNN) -- If the early reviews are anything to go by, critics are giving Ryan Reynolds' outing as Green Lantern a pasting. The story is rushed and derivative, but there is a fair amount to enjoy in a goofy, unpretentious CGI spectacle aimed at the younger teen crowd.

It's true that there isn't much we haven't seen before.

Reynolds is test pilot Hal Jordan, a rash and reckless daredevil with a playboy lifestyle and daddy issues -- not so very different from "Iron Man's" Tony Stark. He gets an unexpected life-changer when an emerald ring picks him to join the cosmic watchmen, the Green Lanterns. They're a kind of intergalactic peacekeeping force that harnesses the power of positive thinking to whack evil into submission.

The Lanterns' visualization process -- they can will a weapon into being through the power of imagination -- reminded me of the duel between Merlin and Mim in Disney's "The Sword in the Stone," when the wizards try to out-do each by transforming into animals of escalating ferocity.

It's a deliciously silly notion and a sign that this superhero movie won't be taking itself too seriously. The first time Hal has to put his mind to work in a moment of crisis, he comes up with a drag-racing car and what looks suspiciously like a Hot Wheels track, probably because he's just an overgrown kid at heart.

Hal is the Lanterns' first human recruit, and there is widespread skepticism that he has what it takes to protect his corner of the universe. They're doubts that he shares, actually. It's only when potential girlfriend Carol (played by Blake Lively) falls into the clutches of their toxified old acquaintance Hector Hammond (played by Peter Sarsgaard) that Hal steps up.

While flip bravado suits Reynolds as close as the musculature of his skin-tight green uniform (topped off with that ridiculously dinky and ineffective mask), the acting honors go to Sarsgaard as the weaselly Hector, a pathetic biology teacher who succumbs to the dark side after he's infected with extra-planetary toxins.

The character is the ugly mirror image of what's going on with Hal -- and he only gets uglier, festering and mutating into a grotesque maniac who resembles the Elephant Man. The make-up team did a fantastic job, but somehow Sarsgaard clings on to some vestige of humanity even to the end.

Whether Warner Bros. was wise to issue an extended clip from the climax in the run up to the release must be open to question. It's come to something when the studio is disseminating spoilers of its own blockbuster.

The choppy narrative also suggests the studio demanded harsh pruning in the editing room -- making a pretty straightforward scenario more confusing than it should have been and undermining some of director Martin Campbell's efforts to give the action psychological grounding.

But first and foremost, this is an effects picture, and on that score, the filmmakers have come up with an impressive menagerie of alien beings, including a charming talking fish (played by an incognito Geoffrey Rush) and bulbous-brained guardians whose robes are hundreds of feet longer than their bodies.

There is also an exceptionally grotesque villain resembling a malevolent storm cloud with a ghoulish, protruding skull -- scary enough to freak out younger children who will otherwise enjoy the show.

All in all, it's far from the disaster some are making it out to be.