'Thor' hammers out a $66 million opening 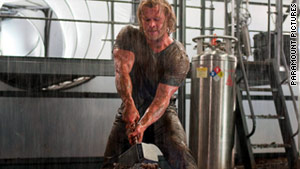 The superhero film "Thor" smashed its competition this weekend with a $66 million debut, according to studio estimates. Among other Marvel-based movies, "Thor" opened better than "The Incredible Hulk" ($55.4 million) but fell short of "X-Men Origins: Wolverine" ($85.1 million) and "Iron Man" ($98.6 million).

The $150 million action film, which was distributed by Paramount and produced by Disney-owned Marvel Studios, attracted an audience that was 63 percent male. Surprisingly, the PG-13 movie skewed older, with 72 percent of its audience over the age of 25. CinemaScore moviegoers gave "Thor" a "B+" rating, and 3-D showings brought in 60 percent of its gross. IMAX theaters, in particular, accounted for 10 percent of the movie's earnings.

"Fast Five," which premiered last weekend to a commanding $86.2 million, dropped a steep 62 percent for $32.5 million. That decline duplicates the performance of 2009's "Fast & Furious," which also fell 62 percent its second weekend. However, considering "Fast Five's" mostly positive reviews and its excellent "A" grade from CinemaScore audiences, industry experts thought the street-racing action flick would hold up better than this. Nevertheless, "Fast Five" has already collected a massive $139.9 million domestically in just two weeks.

Third place could be a photo finish between two PG-13 romantic comedies: "Jumping the Broom" and "Something Borrowed". Although "Borrowed" started the weekend out in front, "Broom" is now expected to push ahead today with a weekend debut of $13.7 million.

"Jumping the Broom," made for only $7 million, stars Paula Patton and Laz Alonso as an engaged couple whose families butt heads at the wedding. The TriStar release drew an audience that was 70 percent female, and they liked what they saw - CinemaScore graders handed the film an "A" rating.

"Borrowed" was close behind with a $13.2 million opening, and also attracted a female crowd that made up 73 percent of the audience. The Warner Bros. release, about a young woman (Ginnifer Goodwin) who falls for the fiancé (Colin Egglesfield) of her best friend (Kate Hudson), cost $35 million to produce and received an okay "B" grade from CinemaScore moviegoers.

In limited release, "The Beaver," starring Mel Gibson as a middle-aged man who starts using a beaver hand-puppet to communicate with the world, mustered only $104,000 from 22 theaters for a disappointing per-theater average of about $4,700. Jodie Foster directed and costars in the $21 million dramedy.

Check back next week as the 3-D horror action film "Priest" battles the R-rated comedy "Bridesmaids".