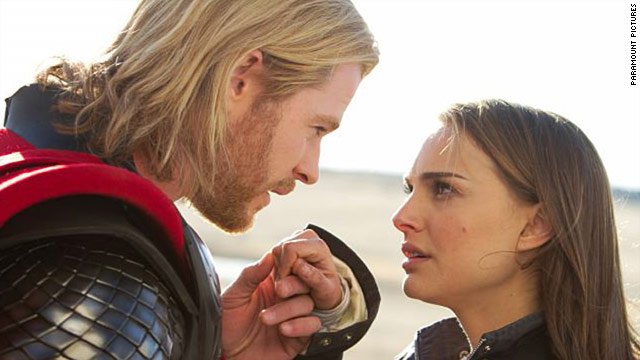 Chris Hemsworth and Natalie Portman find each other in the new movie "Thor."
STORY HIGHLIGHTS

(CNN) -- The Norse god of thunder makes his big-screen debut in the latest Marvel movie, the first of three heading our way this summer. Portents are good for future developments, but director Kenneth Branagh makes heavy weather of the back story.

If you're not up on your Viking mythology, Thor is the guy with the hammer and the tempestuous temper. In Stan Lee's resurrection, his father, Odin, punished Thor's recklessness by condemning him to a double life as Dr. Donald Blake, a physician who would pick up the cudgel when evil threatened mankind.

The movie gives us a brand new deity who is also a bit of both.

The story teeter-totters between the exiled Thor crash-landing in New Mexico -- where he's immediately run over by Natalie Portman's storm-chasing astrophysicist, Jane -- and Asgard, where he vies with half-brother Loki (Tom Hiddleston) to vanquish the Ice Giants (not a hockey team) and win the respect of their father (Anthony Hopkins, gamely trying to inject some Lear-like gravitas while modeling an eye patch and several bespoke bronze helmets).

An unholy combination of a Vegas penthouse and Disney palazzo, Asgard is a computer-generated Valhalla with gold fixtures and diaphanous walls revealing Hubblesque views of the cosmos. A vast waterfall drains out into space, and an electric highway allows the gods to drop in on any of the nine realms, one of which is Earth. The stereoscopic scenery is impressive, but the screenwriters have a tin ear for god-speak, settling for something between Shakespeare and the Mighty Morphin Power Rangers.

Presumably this is why Marvel turned the reins over to Ken Branagh, whose credentials include "Hamlet," "Henry V" and "Much Ado About Nothing." Branagh has a penchant for back-slapping bluster and bravado, as well as the kind of kinky camera-angles that make you wonder if someone's tripod has lost a leg -- which pretty well describes the movie's exhaustingly lop-sided first act.

"Thor" is on much safer ground here on Earth. The tone is immediately different: more relaxed; comic, not cosmic, as Jane and her colleagues (a wisecracking Kat Dennings and mistrustful Stellan Skarsgard) figure out whether the blond muscle man who fell to Earth is a lunatic or a miracle.

In this incarnation, Thor has lost his power tool -- the hammer affectionately known as Mjolnir -- but he has kept his wits about him and takes his new circumstances in his stride.

iReport: "Natalie Portman should give her Oscar back"

Beefy Australian newcomer Chris Hemsworth seems to be channeling the young Branagh in his portrait of an impetuous, gallant alpha male, burning to be king. There's no finesse in the performance, but broad strokes are all it takes; the other actors just bounce off him, and the movie finds its sense of fun.

But it never settles for long. All the substantial plotting takes place on the astral plane in Asgard. The New Mexico episodes feel like a sideshow.

In essence another plank in the elaborate foundation work for the forthcoming "Avengers" movie, what "Thor" sorely lacks is a center of gravity. On the other hand, it is as spectacular as $150 million can buy and very much at the milder end of the PG-13 spectrum. It should hook legions of kids, who can look forward to years more Thor ­-- probably bigger and better ­-- in the future.