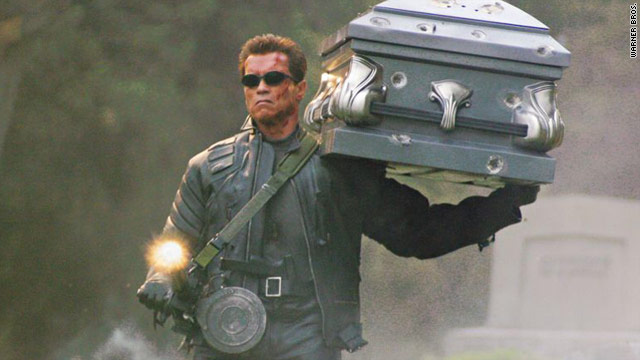 Arnold Schwarzenegger has given Hollywood agency CAA approval to discuss a potential new Terminator movie with studios, a source close to the star confirms to EW, but until Schwarzenegger sees a script and specifics about the project, he will not fully commit to it.

Director Justin Lin (who helmed this weekend's "Fast Five") is reportedly attached to direct the film, but it does not yet have a screenwriter.

The rights to the franchise were sold to hedge fund Pacificor last year in a deal worth $29.5 million after Halcyon Holding -- which had acquired the franchise in 2007 -- declared bankruptcy. Sony and Lionsgate had attempted to jointly bid for the property, but the bankruptcy judge awarded it to the Santa Barbara, California-based hedge fund management company instead.

The most recent film in the sci-fi franchise, 2009's "Terminator Salvation," grossed $371 million worldwide, but did not star Schwarzenegger (although his computer-generated likeness did make a brief cameo in the film's final act). The former California governor's last starring role was in 2003's "Terminator 3: Rise of the Machines" (global gross: $433 million), and he continues to be strongly identified with the cybernetic assassin that helped propel him to superstardom.

EW reported exclusively last month that Schwarzenegger's first post-governor gig would be the animated series "The Governator," a play off of the title combining "governor" and "Terminator" that became synonymous with his tenure running California's government before he even had the job. "When I ran for governor back in 2003 and I started hearing people talking about 'the Governator,' I thought the word was so cool," Schwarzenegger told EW last month.

With so many speculating over what live-action role he will take on first now that he's left the governor's mansion, it's not a huge surprise that while the 63-year-old is done being governor, he may not quite be done being the terminator.