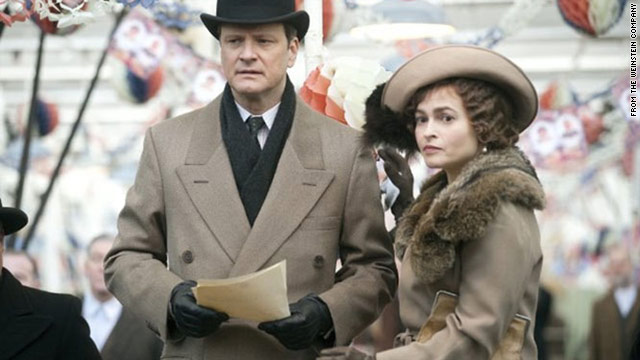 Colin Firth and Helen Bonham Carter in the film "The King's Speech" which follows the story of King George VI as he struggles to overcome his stammer.
STORY HIGHLIGHTS
RELATED TOPICS

London, England (CNN) -- It's a family lineage littered with public scandals, private feuds, salacious secrets and oodles of intrigue. Britain's royal family has, for centuries, made headlines as well as history.

Now, as Kate Middleton prepares to join the royal fold, what better way to get into the spirit of the big day than by reliving some of the royal family's most memorable moments -- past and present?

No, we're not suggesting you pick up the old history books, not when Hollywood has re-told some of the monarchy's most dramatic moments through the magic of the silver screen.

From King George III, who suffered a bout of madness, through to King George VI who battled a debilitating stammer, we've picked six films documenting the lives of some of Britain's most controversial, colorful and contentious monarchs.

When the late Diana, Princess of Wales -- mother to Princes William and Harry-- was killed in a Paris car crash in 1997 there was an unprecedented outpouring of public emotion. But while the public mourned openly, the royal family remain aloof and restrained in their grief. Accused of being out-of-touch with the British people, the film follows the current Queen Elizabeth II, played by Helen Mirren, as she struggles to navigate the right course in the aftermath of Diana's death, her reaction to the public's anger and her relationship with the new image-conscious Prime Minister, Tony Blair.

Recently laden with Oscars, "The King's Speech" tells the story of Britain's stammering and reluctant King George VI (the father of Britain's current Queen Elizabeth II) as he struggles to come to terms with his brother's abdication. Including a stellar cast -- with Helena Bonham Carter playing his wife Queen Elizabeth, the late Queen Mother and Geoffrey Rush as his speech therapist Lionel Logue -- the film documents the unusual and somewhat eccentric methods undertaken by Britain's introverted king in order to overcome his debilitating speech impediment.

Charting the young and inexperienced Queen Victoria as she ascends the throne, this film follows the rocky years of Victoria's early reign and her tempestuous relationship with first cousin and husband Prince Albert. At the tender age of 18, having been cloistered most of her life, Victoria is now queen of Great Britain and all her colonies. But inexperience comes at a price and the young, headstrong and somewhat obstinate Queen (played by British actress Emily Blunt) finds herself at the center of a political scandal. Add to this a steamy romance, a scheming set of relatives, glamorous locations and opulent costumes and you've got all the makings of an enthralling drama -- as only the Victorians know how.

What do you do when the King of England goes mad? This film imagines the events surrounding King George III's apparent descent into insanity, which plunged the British monarchy into disarray. It's 1788, the King has recently lost the American colonies and by all accounts, lost the plot, running around in pajamas and lunging at unsuspecting female courtiers. While doctors are flummoxed, their rudimentary procedures unable to cure him, his son, the Prince of Wales, conspires to overthrown his father by becoming Prince Regent. The film offers a revealing and rather sad insight into 18th-century medical practices and the politics surrounding the royal household.

Elizabeth I is undoubtedly one of the Britain's most famous rulers. The daughter of Henry VIII (famous for having six wives) and Anne Boleyn, the film is loosely based on the early years of her reign, a tumulus period which saw the young Queen's throne under constant threat. Exploring the dark and bloodthirsty world of Elizabethan politics, the film dramatically portrays how the Queen (played by Cate Blanchett) grows from a naive young girl, locked in the Tower of London by her half sister, to the steely, white-faced Virgin Queen who oversaw the golden era of Elizabethan England.

This gritty adaption of Shakespeare's famous play about England's medieval king features an all-star cast directed and starring Kenneth Branagh. The events follow King Henry V's exploits as he fights a bloody war to conquer France. The film features the famous St Crispin's Day speech as Henry V rallies his troops before the Battle of Agincourt and culminates with the seduction of Princess Katharine of France (played by Emma Thompson). A critical success, the film was also widely praised for the accessibility of its Shakespearean language.