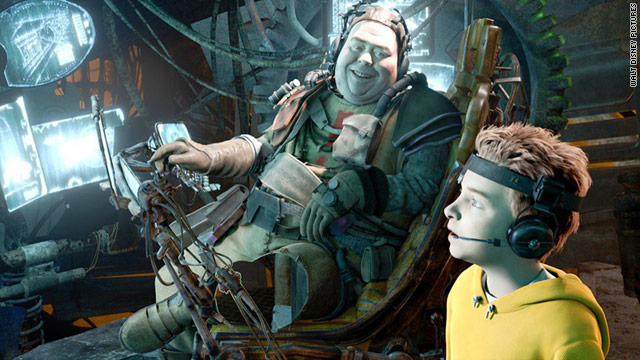 With its splendid use of computer-generated motion-capture animation and 3-D effects, the movie is also visually magnificent.
STORY HIGHLIGHTS
RELATED TOPICS

(EW.com) -- Does invoking the mighty name of "Avatar" to describe the pleasures of "Mars Needs Moms" sound presumptuous?

Hear me out: "Avatar" is a great, myth-minded adventure about a human guy able to project himself into the beatifically peaceful world of the Na'vi from Pandora. Despite an earthbound script, the movie, with its computer-generated imagery and 3-D effects, is visually magnificent, proudly so. Also long.

In a parallel universe, "Mars Needs Moms" is a great, jaunty adventure about an unruly kid named Milo (Seth Green, the right guy for the job) who had no plans to go to Mars but finds himself there anyway.

He's been inadvertently scooped up by the same alien kidnappers who made off with his mother (Joan Cusack, custom-fit) to plunder her maternal DNA for child-rearing tips. (Martian surveillance has verified that Milo's mom is good at nagging her boy to take out the trash.)

Enhanced by nimble ad-libbing from the comedy-trained cast, the screenplay is delightful, by turns funny and emotional, as befits a Disney family fable in which, through wacky adversity, Mom and kid reaffirm their love for each other while Dad is nowhere in sight. (He's not dead, just away on business.)

And with its splendid use of computer-generated motion-capture animation and 3-D effects, the movie is also visually magnificent -- modestly so. Plus, it's half the length of "Avatar."

I don't know why performance-capture moviemaking -- the kind pioneered in "The Polar Express" and "A Christmas Carol" by Robert Zemeckis, who also produced "Mars Needs Moms" -- hasn't received more applause.

Thanks to its unique ability to blend both animate and inanimate subjects in one magical landscape, it may be the technology-based artistic medium best suited to 3-D projects.

More on movies from EW.com

Certainly it's the right way to go when visiting the Mars of this cool story, a wittily conceived planet of curvy female soldiers and sidelined males, ruled by a splendidly screechy old crone called the Supervisor. (She's voiced by Austin Powers' excellent Frau Farbissina herself, Mindy Sterling.)

Milo, by the way, would be dead on the Red Planet without the help of a fellow human who calls himself Gribble (slam-dunk excitability from Dan Fogler). Another dude whose mom was picked up for Martian study years ago, Gribble is a chatterbox, a slob with a big heart, and a resourceful geek who lends Milo a weight belt so the boy doesn't waft away in zero gravity.

Personally, I cared more about him than I did about Jake Sully in "Avatar." But who says you have to choose?

See the original article on EW.com