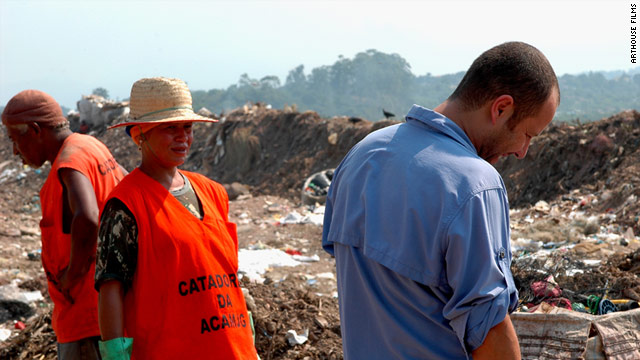 Los Angeles (CNN) -- One of this year's Oscar-nominated documentaries emerged from the middle of a landfill. The world's biggest garbage dump, in fact.

"Waste Land" is the moving story of what transpired when renowned Brazilian-born artist Vik Muniz embarked on a major art project at Jardim Gramacho, a landfill near Rio de Janeiro where 7,000 tons of garbage is unloaded every day.

Filmmaker Lucy Walker followed Muniz as he spent months photographing catadores, impoverished local people who scrape out a living by picking through the dump for scrap metal and recyclable materials.

"[The catadores] are ostracized," Walker said in an interview with CNN. She said she was struck by "this idea that people were discarded, people were human garbage and they're busy sort of fighting for a livelihood," rejecting the alternative of becoming "drug traffickers or sex workers."

Walker said she was touched by their humanity.

"The moment I got to the garbage dump and met the people there, [I] realized that they were outrageously charming, brilliant people. It's remarkable what human beings are capable of doing in a jam [to survive]."

The catadores were not simply passive subjects for Muniz. The film shows how they collaborated with him, selecting garbage from the dump to transform their portraits into 3-D works of art.

Muniz auctioned the resulting portraits, and all of the profits went to a fund managed by the catadores themselves. It's helping many of them escape a life of poverty.

The film has reduced some viewers to tears, according to musician Moby, who provided the score to the documentary.

He recently attended a screening at the Museum of Modern Art in Manhattan.

"It was a very jaded New York audience," Moby recalled in an interview with CNN. "Everyone sits down expecting to be unimpressed and underwhelmed. And about halfway through the movie, everyone in the theater is crying. ... Somehow, the movie got through to them. And the man sitting next to me, this 60-year-old man who probably hasn't cried in 50 years, is sitting there with tears coming down his face."

Walker says she's tickled to be heading to the Oscars.

If "Waste Land" came from a landfill, another film contending for Best Documentary emerged, as it were, from the earth.

Director Josh Fox told CNN he decided to make his documentary "Gasland" after a natural gas exploration company offered his family $100,000 for the rights to drill on their rural Pennsylvania property.

"This project sort of walked up on my front porch," Fox said. He said he had no experience as a documentary filmmaker but felt compelled "to investigate before I sign on to any industrial process."

The industrial process in question is called hydraulic fracturing, or fracking, in which chemicals are pumped deep underground to force out natural gas. Proponents say large-scale drilling can reduce America's dependence on foreign energy, but Fox's film says it comes at a terrible environmental and human price.

"The [fracking] chemicals are turning up in people's water supplies, and the gas itself is turning up in aquifers," Fox told CNN. "And once you get those aquifers contaminated, you can't clean them. It's very, very difficult to get those pollutants and chemicals back out, and those are carcinogens, and people are getting sick."

The film contains startling images of water catching fire, including video of a Colorado homeowner who holds a lighter to a running faucet. After a moment, the water ignites. Fox says the flammability is a direct result of contamination from fracking chemicals.

"Some of my [movie] subjects were showering in the dark because they were afraid that a spark from their light bulb would blow up their shower while they were in it."

Energy in Depth, a natural gas industry trade group, calls "Gasland" a work of fiction. The organization's executive director wrote a letter to the Academy of Motion Picture Arts and Sciences protesting the film's nomination, citing the Academy's criteria for documentaries, which say they "must maintain an 'emphasis ... on fact and not on fiction.' "

The letter accuses Fox of "misstating and outright ignoring basic and verifiable facts related to the impact" of natural gas development "on the health and welfare of humans, wildlife and the environment."

Asked to comment on the letter, Fox responded, "I stand behind everything in the movie 100%."

Three less controversial films are also in the running for the Best Documentary Oscar, including "Exit through the Gift Shop," "Inside Job" and the Afghanistan war film "Restrepo."

Whether the winner turns out to be "Gasland," "Waste Land" or one of the other contenders, Fox says he's simply happy to be invited to the Academy Awards.