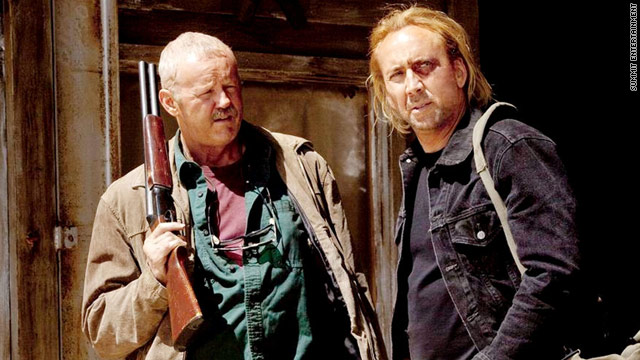 Great title -- shame about the movie.

I wanted to like "Drive Angry" too: John Milton escapes from hell to save a baby from satanic sacrifice. You don't see that everyday -- unless you're an avid Nic Cage fan, I guess.

It's not so long since he gave up his soul to battle Satan's progeny in "Ghost Rider," and we can look forward to "Ghost Rider 2" this time next year. Perhaps Cage is worried about being typecast as a supernatural hell-raiser since he's just going through the motions here.

In case you're wondering, we're not talking about John Milton the 17th century English poet -- though I bet Cage would have relished playing him.

This Milton, played by William Fitchtner is more likely to let his six-barreled shotgun do the talking as he blasts three-dimensional holes in anyone who stands in his way.

Co-written and directed by Patrick Lussier ("My Bloody Valentine"), "Drive Angry" tips its hand early, when Milton sends one thug's disembodied digits flying off into our laps in split seconds of glorious, gory slow-mo.

From the way Lussier and his screenwriting partner Todd Field drop the F-bombs, it's obvious they were out for a hard R rating, and they knew exactly what they wanted to do with it. There are flying body parts, women talking dirty, drinking, smoking, and casual sex -- sometimes all at once.

If you saw "Shoot Em Up," you'll remember Clive Owen offing bad guys even as he's getting it on with Monica Bellucci. That scene gets an extended replay here, with more bodies (dead ones) and the addition of an electric cattle prod to Milton's derriere. We're supposed to laugh at that, and most of us probably follow the prod even if it does leave a sour taste in the mouth.

Cage back from the dead in 'Drive Angry'

Bad to the bone, "Drive Angry" wants to be the party animal, to sink the keg, trash the joint and hit the road before dawn. This is bad-ass cinema, loud and proud; a roller derby of hot cars (a 1969 Charger), hot women (an impressively ballsy Amber Heard), and hotheads (Billy Burke, from "Twilight," as the cult leader).

Does it try too hard? Yeah, it tries too hard. But that's not the problem.

Most movies don't try hard enough. The trouble is there's nothing to animate the film's rebel spirit. Underneath the attitude, "Drive Angry" is running on empty. The thin story keeps stuttering between its multiple showdowns. It shouldn't be that hard for Milton to get the better of a dozen devil-worshipping rednecks -- they can't hurt him, he's already dead.

Lussier's direction is style-conscious but tone-deaf; his action scenes a confusing hodgepodge of random cuts. Someone buy this man a navigation system! And his rhythm is off: The film dawdles when it should sprint. As for the 3-D, as usual the pact trades off crisp, bright photography for novelty value.

Admittedly, you would have to be a corpse not to find some of this amusing: William Fichtner strides through the proceedings as hell's repo-man, a cut-price Christopher Walken looking for some respect.

His interrogation of Amber Heard's fiancé (played by Farmer) gets exactly the right measure of black comedy and over the top violence. Too much of the rest is a blunt instrument in comparison -- though if you enjoy a couple of beers beforehand you probably won't notice.