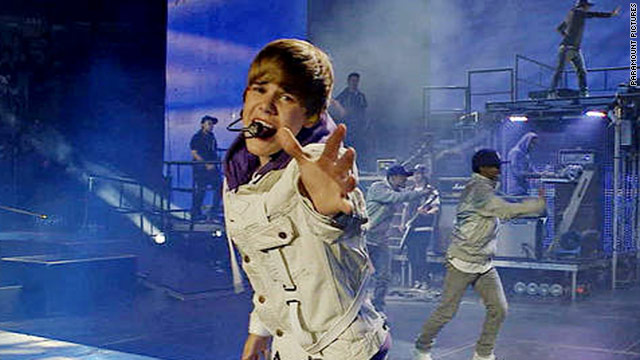 (CNN) -- Depending on your age, Justin Bieber is either a dim blip on your fading pop culture radar or, like, the hottest thing ever.

At nationwide preview screenings Wednesday evening, his fans paid in the region of $40 a ticket to be the first to see the Biebster's 3-D feature documentary -- and if the audience I saw it with was typical, they loved every minute of it.

The demographics were school-age and 98 percent female. Of the 10 guys I counted, I'd say one was a dad, and at least five of the rest were paid to be there (like me).

Biebermania may not have the staying power of Beatlemania -- and at 16 Justin is three years older than Little Stevie Wonder was when he topped the singles charts in 1963 -- but it's hard to think of anyone else who has come so far so fast. Unlike Michael Jackson, he wasn't born into a showbiz family. Unlike Britney or the Jonas boys, he wasn't a graduate of the Mickey Mouse Club talent school -- or any other school for that matter, unless you can be a graduate of YouTube.

Bieber was homegrown talent, an only child brought up by his mom and his grandparents in Stratford, Ontario. By the age of 3, he was drumming, and at 8, he was good enough that a local Christian group held a benefit gig to buy him a proper set.

He entered a local talent show at 12 as a singer, but came in second. It was his YouTube posts that caught the eye of his future manager, Scooter Braun, and it was YouTube that gave him a platform (in July last year, Bieber's song "Baby" became the most viewed YouTube video ever).

"Justin Bieber: Never Say Never" is less a traditional concert movie than a backstage pass, the chance to hang out with the team: the manager, the mentor (Usher), the vocal coach (Mama Jan), the stylist, the mom and, of course, the talent. They seem like a good bunch. There's a lot of banter, group prayers (Bieber is a Christian), and when push comes to shove -- when he's told he'll have to postpone a concert or risk canceling several -- this clean-cut, polite 16-year-old toes the line and does what he's told.

Directed by John Chu ("Step Up 3D"), the film fills in more backstory than we usually get in these things, in part because Justin's family seems to have taken their archival responsibilities seriously from an early age, and maybe because he doesn't have that much interesting to say for himself (or to sing about) just yet.

The movie is both up front (we see the absent dad tearfully watching his boy perform) and disingenuous (no one talks about the split, the father-son dynamics, or how it might have fueled Justin's relentless drive to succeed). Like JB's Twitter account, it presents a superficial intimacy without risking anything too personal. Which may be all his teenage fans want or can handle right now.

On stage, at a sold-out show at Madison Square Garden, Bieber is skinny, lithe, super-confident and unformed. He's still more of a child prodigy, brilliantly mimicking the moves he's picked up from TV, than an authentic voice. Though in fairness, as the movie makes clear, he was fighting off a throat infection at the time.

When Miley Cyrus joins him on stage for a duet, the 18-year-old veteran looks so much more mature that it seems like she might eat him alive. He can make the girls cry with happiness, yet there's no sign he's ever had a meaningful relationship with one.

But Bieber's unquestionably gifted, and if he's smart enough to listen to the grounded, talented folk around him, there's every reason to hope that he'll turn out to be just fine when he grows up.