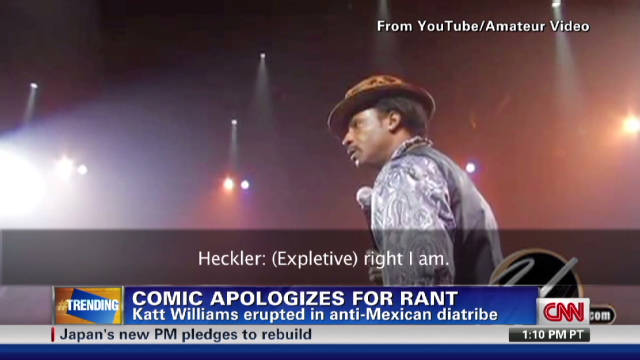 (CNN) -- An Arizona civil rights activist says he accepts Katt Williams' apology for an anti-Mexican rant during a comedy show in Phoenix last weekend, but he's calling on the comedian to return to the city to "show his commitment to the Latino community."

"What he said was borderline hate speech and racially offensive," said Rev. Jarrett Maupin, who is organizing a boycott of Williams' stand-up act. His words could also create "violence and tension" in the community, he said.

Williams, an African-American comedian known more for his erratic behavior than his jokes in recent months, issued a written statement through his publicist Wednesday that included an apology.

"My remarks were not meant to be offensive," Williams said. "I want to apologize if my comedy act was taken out of context."

"I sincerely appreciate my fans within the Mexican community and would never intentionally go out of my way to offend them," he added.

Video of the rant, delivered during a performance at the Celebrity Theater Saturday night, was posted online. Williams singled out a man seated near the stage and asked him if he was Mexican.

"It appears to me y'all like it over here a lot," Williams then said.

He then launched into his tirade.

"Do you remember when white people used to say 'Go back to Africa,' and we'd have to tell them we don't want to? So if you love Mexico, (expletive), get the (expletive) over there!" Williams said to the man.

As the rant turned into a back-and-forth profanity-laced argument with the man, Williams exclaimed, "We were slaves, (expletive). You just work like that as landscapers."

The state has been a political battleground in recent years over passage of an immigration reform law.

Williams' "flippant statements reflect poorly on the African-American community and there's noticeable tension in our community," he said. "Celebrities' comments can lead to violence and tension in the community."

The written apology is not enough, Maupin said. "I accept the apology if it's sincere, but his remarks were offensive."

The "real test of his commitment" is Williams' willingness to do more.

He suggested that comedian Tracey Morgan's return to Nashville, Tennessee, this summer to personally apologize for anti-gay remarks in a stand-up show there is an example of how Williams can make amends.

Maupin said he was surprised by Williams' rant because his previous dealings with the comedian were positive.

"I have compassion for Katt Williams," he said. "It's up to him to let the community know if he's going through some personal or professional challenges."

Williams' often raunchy style has drawn comparisons to comedy legend Richard Pryor, but Maupin said there is a "noticeable difference" in Pryor's joking about race and what Williams said in Phoenix.

The last two years, however, have been highlighted by several arrests and other incidents at clubs.