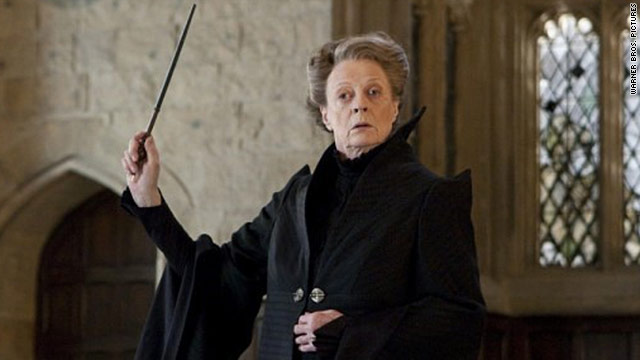 Spoiler alert: Please do not read on if you have not seen the last Harry Potter film yet. This article is entirely spoilers. If you DID see the movie last night, read on and tell us what you thought!

Atlanta, Georgia -- If you're bleary-eyed and yawning after a late-night screening of "Harry Potter's" final movie installment, the lasting impressions of "Deathly Hallows Part II" are no doubt the only things keeping you awake today.

Here are some of the moments from the film that made fans gasp, applaud and giggle:

• The 3-D specs are in the shape of Harry's iconic round glasses!

• When the Ukrainian Ironbelly guard dragon in Gringotts takes flight, it's a magical moment: The animation is some of the best fantasy fans have ever seen on screen. The beautiful and slinky movements of the dragon allow the viewers to suspend any disbelief, and this beast is a "Harry Potter" best.

• Alan Rickman shows off his acting chops as Professor Snape. The Headmaster of Hogwarts' first deliciously evil line comes when he warns the students and staff that anyone who does not come forth with information regarding the whereabouts of Harry Potter will be found, "Equally. Guilty," as those actively hiding him. The delivery is thrillingly sinister!

• Maggie Smith as Professor McGonagall unleashes her inner geek when she says, "I've always wanted to use that spell," after rousing the stone knights to protect Hogwarts.

• Yes, it's really the end: The first moment you realize this is the view of the quidditch field burning down as Voldemort's forces storm Hogwarts.

• Hermione and Ron share a very sexy smootch. Finally, these two characters seal their love for one another with a kiss, and when the initial excitement of the scene wears off, viewers begin to realize that this is a very steamy and adult liplock. Rupert Grint and Emma Watson bring authenticity and spark to the scene.

• Neville Longbottom has the hots for Luna and is ready to do something about it after steeling his nerves in battle. "Have you seen Luna?" he asks Harry. "I've got the hots for her!"

• Snape's death scene is brutal, violent and elemental. Even though viewers don't get to see the killing, they hear it. The sound of an attacking Nagini is shocking in its intensity and the scene leaves the audience raw.

• Moviegoers will need a Kleenex when Harry Potter put Snape's memories in the Pensieve. The scenes of Snape and Lily show a life of love, torture and loss that Alan Rickman masterfully embodies.

• Did you know Gollum is in this movie? Voldemort's dead soul seems like it took a wrong turn in cinema purgatory and ended up in the "Harry Potter" film instead of one from the "Lord of the Rings" franchise.

• Elitist wizards sure have some awful teeth! Both Voldemort's and Bellatrix Lestrange's grins during the final assault on Hogwarts are unsettling for all the wrong reasons.

• Mrs. Weasley's besting of Bellatrix in their duel is sure to be a big hit with audiences.

• When Neville slays Nagini with the sword of Gryffindor, it's the ultimate fantasy moment. In case you were wondering, Neville is a hero now. The beautifully rendered scene looks like an homage to Raphael's painting, "St. George and the Dragon."

• Mr. Filch is so very grumpy as he settles in to clean up the rubble from the most significant battle in Hogwart's history. He is not amused.

• In the epilogue, Draco's beard and Ron's pot belly are so bad they're good.

What did you think of "Harry Potter and the Deathly Hallows Part II"? Did we miss any of the moments from the film that most inspired you? Let us know in the comments section below.