Mr. Lucas, the 4th is not to be trifled with 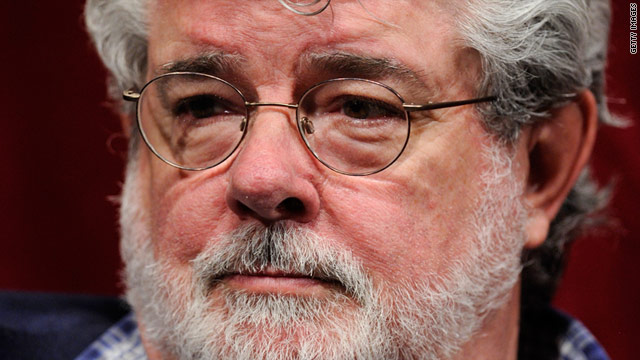 CNN.com's Topher Kohan wants to know, George, how could you?
STORY HIGHLIGHTS

Editor's Note: Today is seen as a holiday by many "Star Wars" fans. The official "Star Wars" website has commemorated the day with a sneak peak of the upcoming Blu-Ray collection of all six "Star Wars" movies. CNN.com's search engine optimization expert Topher Kohan owns 12 different versions of "Star Wars" and has watched "Star Wars" and "The Empire Strikes Back" more than 500 times. As an avid "Star Wars" fan, Lucasfilm's May 4th webpage didn't sit well with him -- to say the least. Here is his open letter to George Lucas and his fellow "Star Wars" fans.

Happy Star Wars Day to you! I hope you are enjoying May the 4th, the day fans of your movies have turned into an unofficial holiday celebrating the world you have created, and which we love.

As you -- or whomever you pay to do it -- look through the social networks and see your fans declaring "May the 4th be with you," please stop and think about how you have turned it into a bad marketing ploy for the Blu-Ray release of the "Star Wars" movies.

I am sure by now that all is revealed on the official Star Wars May the 4th Day page, and now enough people have spread the word of how you are revealing images and information from the upcoming release of the movies on Blu-Ray. In order to see more and more extras, they had to press a "share this site" button, spamming their friends in order to get a glimpse of the forthcoming DVDs.

I am sure the extras revealed through the site will give fans plenty to talk and debate about. I, for one, am excited to see the special features and hear the commentary tracks that have been revealed and every other part of the Blu-Ray DVDs when we get them in September.

But that's months from now. Today is a special day, just for fans. Why, then, would you take advantage of your fans to promote something that we won't even get to buy until September 16?

Why do this now? Is there a chance that you did not know why May the 4th was special to "Star Wars" fans?

That it is a day we all get to say, "May the 4th be with you," a play on your great line, "May the Force be with you," with unabashed geekiness? This is a day when fans get to show the world how much we love the "Star Wars" world you created; a day to show just how large the fan base is; that "Star Wars" is one of the greatest movies ever made. Didn't you know?

Did you think we wouldn't buy the DVDs in record numbers? Are the preorders on Amazon not hitting big enough totals for your liking?

Of course most, if not all, of your fans will buy the "new" versions of these movies. And just like I said in my last letter to you -- you did get my last letter, right? I only ask because I never heard back from you, so I was just wondering -- I am sad to say, we'll buy them all over again when you release "newer" versions of them in the future.

But I ask again, sir, why today?

It's a little funny that you are using the fans and their social networks to reveal tantalizing tidbits of the upcoming Blu-Ray DVDs when you recently announced the official Starwars.com forums will be closing on June 3.

It is also interesting that by yesterday the forums were already locked down to read-only. Does that mean that it's OK to use your fans' voices to promote a product but it's not OK for them to voice dissent on your own website?

Today was supposed to be a day of celebration. But now all I want to do is vent. How can my fellow fans of the Star Wars universe let their voices be heard? Should we just use the Facebook page? If we feel taken advantage of by the Star Wars May the 4th page, should we e-mail Lucasfilm?

Of course, I thank you for the incredible, imaginative world you created with "Star Wars," and for the happiness it's brought me and all your fans. And I'm sure I will get hours of enjoyment from the new DVDs when I get them in September. But I did not and do not want them marketed to me on this day.

May the 4th is a day that we created, and you, sir, are trying to steal from us.

May the Force be with you!