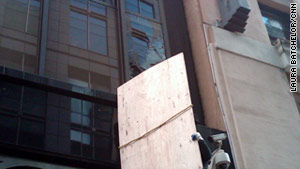 New York (CNN) -- R&B singer Chris Brown stormed off the set of ABC's "Good Morning America" show after he was interviewed about a 2009 altercation with ex-girlfriend Rihanna, the network said.

Following a Tuesday interview with "GMA" co-anchor Robin Roberts, who mentioned a restraining order that resulted from the incident, Brown left the set and "stared down the producer" responsible for the segment, according to ABC.

The show producer later discovered that the thick glass from Brown's dressing room window had been smashed, ABC said.

A shattered window was visible from outside of the ABC building in Manhattan. The window was replaced later Tuesday.

"As always, we asked questions that are relevant and newsworthy, and that's what we did in this interview with Mr. Brown," ABC News said in a written statement.

After the interview, pegged to the release of his album F.A.M.E., Brown responded on Twitter saying, "This album is for you and only you!!! I'm so tired of everyone else."

Last month, a Los Angeles County judge lifted the "stay away" order imposed on Brown after he was charged with assaulting Rihanna on the eve of the 2009 Grammy Awards.

Brown was sentenced in August 2009 to serve five years probation and to spend more than 1,400 hours in "labor-oriented service" for the assault conviction.

He was also ordered to complete a 52-week domestic violence program.