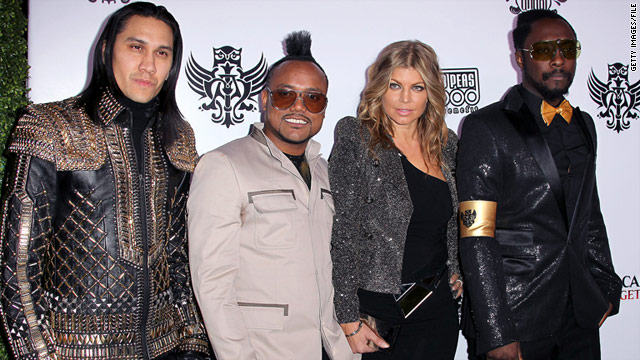 (CNN) -- The Black Eyed Peas have joined a growing list of artists and celebrities calling attention to the disaster in Japan.

The group shot their latest music video for the single "Just Can't Get Enough" in Tokyo a few days before the 9.0-magnitude earthquake and the resulting tsunami rocked the island nation.

The video opens: "This video was filmed in Japan one week before the earthquake. Our thoughts and prayers go out to all the people of Japan. We love you."

The video closes with a link to the Red Cross. The video is scheduled to premier this week and the group will perform the song on "American Idol" Thursday night.

The international aid agency appeared to be the charity of choice among celebs. Many are encouraging their fan bases to make donations via text message.

"Imagine... if we ALL texted REDCROSS to 90999 we'd have raised over 60million dollars for #JAPAN REFLIEF! BE THE CHANGE YOU WANT TO SEE! BE!," said a post on singer Katy Perry's Twitter account this week.

Lady Gaga is taking a different approach, selling red-and-white "We pray for Japan" wristbands, which feature an image of the singer's monster paw gesture.

"Little Monsters, show your support for Japan with this 'We Pray For Japan' wristband!" her website said, encouraging her fans to donate. "All proceeds go directly to Japan relief efforts."

Mike Shinoda of Linkin Park has designed a T-shirt to benefit Music for Relief's Tsunami Relief in Japan. Donations of $10 can be made by texting "MFR" to 85944.

Music for Relief also established a fund after the Haiti earthquake.