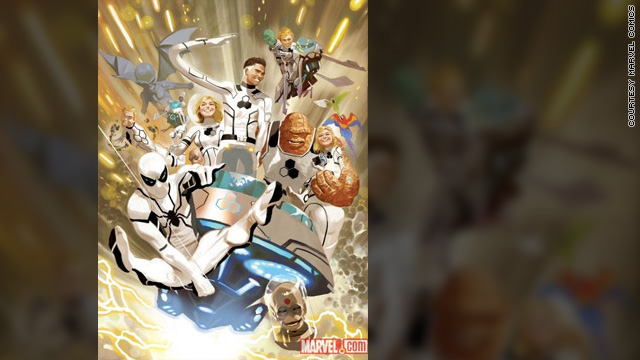 (CNN) -- When Marvel Comics Executive Editor Tom Brevoort told CNN in December that "something new" would come out of the recent death of the Fantastic Four's Human Torch, he wasn't kidding.

For starters, they won't even be using the name Fantastic Four. On Wednesday, Marvel announced that the team is now going to be called the Future Foundation, debuting in "FF" No. 1 in March.

Gone are the traditional blue costumes. The team will now be wearing white-and-black costumes (with three hexagons replacing the trademark number "4," as well).

And then there's the cherry on top: Reed "Mr. Fantastic" Richards, Sue "Invisible Woman" Richards and Ben "The Thing" Grimm will now be joined by the superstar of the Marvel Universe, none other than Spider-Man (also wearing a new white-and-black costume).

Reaction to the news from comic book fans has run the gamut. Here's a sample:

"I think it's a great idea," said Bob Bretall of the ComicBookPage podcast. "The association between Spidey and the FF goes all the way back to 'Amazing Spider-Man' No. 1 in 1962."

One of the most memorable examples of this on-again, off-again partnership with the FF involved a very different kind of costume change. In a 1984 issue of "Amazing Spider-Man," the webhead ended up putting on the iconic original Fantastic Four costume ... and they got around the problem of his mask by having him wear a brown paper bag on his head.

Bretall thinks that Spidey joining the team makes sense on another level: "Given that Johnny (Storm, the Human Torch) has long been Spider-Man's best friend as a superhero, it just feels right for him to step in and round out the roster to four."

Comic book historian Alan Kistler agreed: "Spider-Man is a scientist with a different perspective than Mr. Fantastic, and he specializes in different fields, so it could be very interesting to see how his own expertise rounds out this new Future Foundation. And from another angle, it could be interesting to see how Spidey feels about essentially replacing a person he considered a friend and what kind of pressure this will place on him."

On Twitter, @solidcolt put it this way: " 'Amazing Spider-Man' is possibly better then it's ever been. And now he's joining (writer Jonathan) Hickman's FF so that third movie is totally forgiven."

He might be the most recognizable character from Marvel Comics, and it's not hard to imagine why Spider-Man is so ubiquitous. He's even a current member of the Avengers.

There's a lot of buzz around the new "Spider-Man" film reboot starring Andrew Garfield. And then there's that Broadway musical that made so many headlines before it even officially opened.

Still, some fans might be left to wonder: Why Spider-Man? Why not a new character for the team?

"Injecting Spider-Man into the Fantastic Four will probably boost sales, but it feels like Marvel is kind of pimping out the character and spreading him too thin," Sean Fallon wrote at Nerdapproved.com.

"Normally, the addition of Spider-Man to a 'team' comic might worry me a bit. Spidey is -- along with Wolverine -- one of the most oversaturated characters in the Marvel Universe," G4 TV's comic book guru Blair Butler said. "But this new version of the Fantastic Four comes to us from Hickman -- one of the most innovative voices working in comics today -- so I'm actually really looking forward to it, white suits and all. And if you've read Hickman's other work, the new title and costumes seem to fit his science-based vision of the Fantastic Four perfectly."

Yes, about those new costumes ...

FF's new costumes are true to its roots

Kistler, who often blogs about superhero fashion, looked at what makes the FF special in his assessment of the costumes: "(The FF) spend their spare time looking for other planets and dimensions to explore rather than patrolling for criminals to stop. So the new FF suits work for me as a compromise between customized NASA flight suits and 'Star Trek' uniforms."

White costumes ... really? (And what about Spidey?)

"I'm not too thrilled about the move away from traditional blue, but I'm sure ill get over it," Bretall said. "The new costumes are sleek, if not colorful."

And even though Kistler liked the FF costumes, he is not as thrilled about Spider-Man's look. "It's off-putting at first. Spider-Man has such a unique costume design, with interesting line work and shape, and now most of that's been removed. Black and white works for the rest of the FF, because it's supposed to symbolize their stark look on reality following the Human Torch's death, but Spidey's faced personal death and tragedy many times and has maintained a colorful sense of humor and the belief that eventually things will get better," he said.

"On the other hand, it would be boring to have him wear his classic costume and just add the hexagons to his shirt, so I can accept this as his FF outfit that he wears when he's representing their interests. If he were wearing this in his own comics as well, I'd have a bigger problem with it."

Is this really a permanent change?

As Kistler noted not too long ago on Newsarama.com, the FF have had a lot of costume changes over the years, though this one may be the most drastic.

There have also been a number of changes with the Fantastic Four over the years, particularly the "Heroes Reborn" storyline in the '90s. Which begs the question, how long will these changes last?

"While I am sure I'll continue to enjoy the title as it becomes 'The Future Foundation' for the next year, I fully expect that a year from now, the big news around the title will be that it is reverting to Fantastic Four just in time for issue No. 600," speculated Mayo. "Moreover, there is a strong possibility that issue will feature the heroic return of the Human Torch."

Permanent or not, it will be interesting to see whether these radical changes will ultimately be accepted. Brevoort promises a "unique, powerful new series that's going to surprise a lot of fans with its combination of mind-blowing ideas and visuals."

If it lives up to that promise, you'll be sure to hear exclamations of "Excelsior!" from readers.