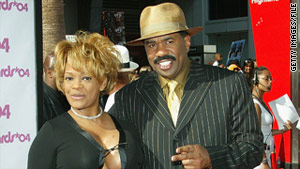 Steve and Mary Harvey, pictured at the 2004 BET Awards, divorced in 2005.
STORY HIGHLIGHTS

(CNN) -- After a judge temporarily lifted a gag order so that he could respond to allegations made on YouTube by his ex-wife, comedian Steve Harvey Tuesday released court documents saying those allegations are false.

Mary Harvey posted a series of videos on YouTube last month about the breakup of the couple's marriage and the bitter fight that followed. She alleged that following their 2005 divorce, Harvey "turned my son against me, had me evicted from our house, thrown out, all the businesses, all the money, the cars ... He manipulated the courts, everything against me."

Steve Harvey could not respond at the time because of a gag order in the case, said attorney Bobbie Edmonds. But Edmonds released a statement Tuesday saying the judge had temporarily lifted the order so Harvey could respond.

Some of the documents released Tuesday are redacted, but they say the court found that Mary Harvey:

-- "was not homeless or evicted from her home and was awarded three homes in the property settlement;"

-- that Harvey "did not take, withhold or turn the child against Mary Lee Harvey;"

-- that Mary Harvey "willingly placed the child on an airplane and sent him to Mr. Harvey without his knowledge;"

-- and that Harvey has primary custody of the 13-year-old.

In the series of videos, Mary Harvey included excerpts of letters and e-mails she said she intercepted between Harvey and his current wife, Marjorie, near the end of her 16-year relationship with him.

She said on their second wedding anniversary, "it hit me really hard" when she intercepted a love letter from a mistress -- the woman he would later move in with and marry.

Edmonds said in late January Marjorie Harvey was "contemplating" filing a defamation suit against Mary Harvey because of the accusations against her.

The 2005 divorce between Steve and Mary Harvey, according to the court documents released Tuesday, "was granted on the grounds of irreconcilable differences and his current wife was not named in the original divorce proceeding, nor was she the cause of the marital breakup."

Attempts by CNN to contact Mary Harvey and her attorney on Tuesday were unsuccessful.

A court hearing was held Monday in Collins County, Texas, on the matter. Harvey asked for sanctions against his ex-wife for allegedly violating the injunction barring her from talking about the family law case in the media or on the internet, and he was allowed to respond.

Harvey "is authorized to publish this order for the limited purpose of refuting the allegations of respondent Mary Lee Harvey," the documents said. "... all prior injunctions and gag orders remain in full force and effect."

The judge also ordered Mary Harvey to remove the videos from the internet -- YouTube and any other sites where they were located.

A hearing is set for March 10, the documents said. Edmonds said that hearing is on contempt of court allegations against Mary Harvey. "During the contempt hearing, the court will listen to the evidence of the parties and determine if there is a violation of the orders and impose the appropriate sanctions and punishment."