Obsessions: It's good to be a Smith kid 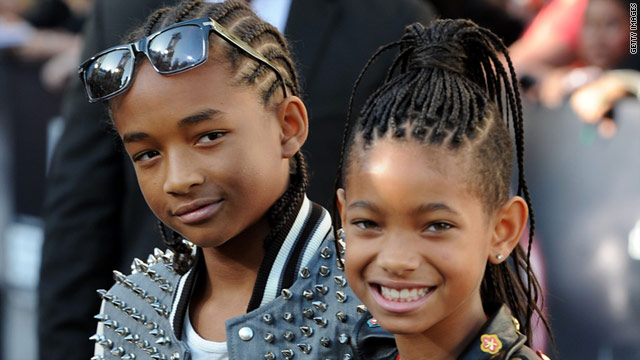 (CNN) -- Jaden and Willow Smith, if you haven't noticed, are having a moment.

In the past year, the children of Will and Jada Pinkett Smith have gone from standing beside their superstar parents at red carpet events to having the red carpet rolled out especially for them.

It began last summer with 12-year-old Jaden's box-office hit, "The Karate Kid," which pulled in $55 million in its first weekend and went on to gross $359 million worldwide, according to BoxOfficeMojo.com. The soundtrack featured a song from teen pop star Justin Bieber, with Jaden showing off his rapping skills.

Now Jaden's headed for the Grammys on February 13, where he'll perform alongside Usher and Bieber. His 10-year-old sister, Ms. "Whip My Hair" Willow, is gearing up to join the Biebs as he tours Europe in March.

The youngest Smith recently unveiled a preview listen of her second single, an uptempo track called "21st Century Girl." An album, she promised on Twitter, is coming "VERY soon!!"

The spotlight on these two has only gotten brighter recently, particularly with news that Willow is set to star in a remake of "Annie," being produced by her parents and Jay-Z, who also has signed her to his Roc Nation label. (Anyone up for a game of six degrees of separation from a fifth-grader?)

But the children's ascent hasn't been without criticism. Some question if the two are being shoved into the spotlight at too young an age, while others are put off by the Smith parents actively creating opportunities for their kids. The conspiracy theorists may fret that the Smiths are strategically trying to take over the world (of entertainment, at least).

Yet neither of these preteens is new to showbiz. At 5, Jaden popped up on the sitcom "All of Us" (on which his older half-brother Trey, whom Will had from a previous marriage, also appeared), and followed that with roles in his dad's film "The Pursuit of Happyness" and Keanu Reeves' "The Day the Earth Stood Still." At 7, Willow appeared in the Will Smith vehicle "I Am Legend," and by the following year, she was acting alongside Abigail Breslin in "Kit Kittredge: An American Girl."

"We knew that Will and Jada had these two kids -- and that Will had Trey -- but they were so quiet," recalls Rachel Chang, editor-in-chief of teen celebrity magazine J-14. "And then they just exploded out of nowhere."

So how did they go from Will and Jada's cute kids to actor/musicians? Well, a few things happened in the past year -- namely, a sense of individual style.

"They started killing it on the red carpet during the 'Karate Kid' premieres," Georgia Toomey, editor of Yahoo's young Hollywood, Crush. "It was obvious right from the start that they had someone styling who knew what they were doing."

Indeed. Willow's red carpet attire in particular -- the Day-Glo colors, the animal print mixed with hammer pants, the hairdo that called to mind an older pop ingenue from Barbados who's also known for her signature looks -- became a conversation piece. The young star has been styled by the same sartorial minds that work with Rihanna, and the attention paid to her eye-catching (for better or worse) get-ups only snowballed after the colorful music video for "Whip My Hair" was released.

"To be totally honest, the first few times she appeared in our magazine was for her crazy fashion," says J-14's Chang, "but that's what got her noticed. For a little girl to dress crazy and confident like Lady Gaga and Ke$ha, that got her noticed first."

Her look may have started the buzz, but what drove it home was the kids' self-assurance, says Tamar Anitai, editor of MTV's Buzzworthy blog, where talk about Willow can nowadays be a weekly occurrence.

"It's almost like a lot of adults are surrendering," Anitai jokes of the kids' popularity. "They have so much personality, and it seems like it's their own. It doesn't seem like they've been media-trained, or (that) they're speaking in sound bites. They're good kids, but precocious -- they have swagger."

Plus there's the obvious, Anitai adds: "Their parents are such megastars." The Smiths, not unlike the Brangelinas of the world, are "the closest thing we have to American royalty."

With the duo gearing up for more work -- Willow with an album and "Annie," Jaden reportedly doing M. Night Shyamalan's "One Thousand A.E." -- it looks like the fever for these two will only escalate, not quite unlike the stronghold their pal Bieber has created.

"I think the thing is, they've proved themselves," Toomey says. "Yeah, there's a bit of nepotism involved, but they're actually talented. ... Jaden was successful in ('The Karate Kid') role, and he's a great little actor." She adds, "You see Willow in that ('Whip My Hair') video and she's so full of energy and has a great vibe. They're out to conquer the world basically."

Chang agrees these two have enough talent and personality to sustain them through the bumps of growing up in the spotlight.

"When you hear that another celebrity kid is trying to make it famous, you think, 'Oh God, here we go again,' " Chang says. "But they did it uniquely in their own way and separately from each other. These two have an appeal that goes beyond just our audience; even moms and dads can recognize them. I think they have a long career ahead."