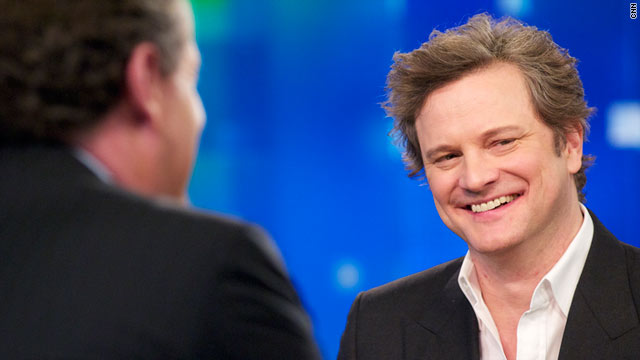 (CNN) -- CNN's Piers Morgan calls the on-screen relationship between "The King's Speech" actors Colin Firth and Geoffrey Rush "one of the great bromances we've ever seen in the movies."

Firth, with his co-stars Geoffrey Rush and Helena Bonham Carter, joins Morgan tonight at 9 to talk about their movie, which leads the Oscar race and has dominated the awards shows so far. All three lead performers and the film itself are nominated for Academy Awards, scheduled to be presented February 27 in Hollywood.

When Morgan asked Firth to describe Rush, the actor said, "I would describe him as my geisha girl."

Geoffrey Rush appeared via satellite from Australia. Firth also called Rush "one of the most thrilling actors I've ever worked with. And I've seen him be howlingly funny and absolutely heartbreaking. He's got the whole spectrum covered."

"We have been texting one another at various points to try and keep sane about the madness that's gone on around the film," said Rush. "And we do tend to refer to each other as Abelard and Eloise or Thelma and Louise."

Firth talked about playing King George VI. "I fell in love with him completely," he said. "I love hidden, glorious and secret heroes. I'm not very interested in people with superpowers."

The film centers on the relationship between George VI (who went by the name "Bertie") and his speech therapist, played by Rush, who worked with the king to overcome what Firth called a "crippling stammer."

The actor called it an "athletic feat just to get to the end of a sentence" for the king.

"When he tried to address the nation," said Morgan, "it was almost torturous to listen to."

Firth saw some 1938 footage of King George VI that was taken after he had been seeing a speech therapist. Firth described the footage as "heartbreaking," saying, "You can see him struggling with the muscles in his face and his neck and that whatever's going on inside -- there's a boxing match going on in his body."

When asked whether he had trouble reverting from the stammer to his normal speech pattern in everyday life, Firth said, "It's bizarre how contagious the stammer is." The actor said that even when he talks about it, "the words are going to get completely backwards."

Morgan likened Firth to "the new David Niven," adding, "You've taken over Hugh Grant's mantle. You're now this debonair, charming British man that every American woman falls in love with."

"I love the label," replied Firth. "I'd absolutely wear that on a T-shirt."

Morgan also pointed out that in the King George role, Firth had ventured away from playing the "classy, archetypical charmer."

"People with problems are far more interesting," said Firth. "If you haven't had any problems, you're bland."

Morgan told Firth that the actor appears "uncomfortable" being a sex symbol.

"If I could truly believe it," Firth said, "I would be so comfortable with it. It's not lack of vanity at all."

Firth also argued that "these things have a shelf life. I mean, I think you've just got to know when you should gracefully hang up one mantle and trade it for another. And ('Pride and Prejudice's') Darcy was 15 years ago."

"We've made it 15 years together," said Firth. "We are crazy about each other." Firth said the couple remains "very committed on a daily basis to how we will deal with our family lives. We have to make sure that we spend enough time together."

Morgan stirred the pot by asking Firth which of his female co-stars he'd like to be stranded on a deserted island with: Renee Zellweger, Meryl Streep, Emma Thompson or Scarlett Johansson.

"Can I have all of them?" Firth joked, but added a few more actresses to the list: Bonham Carter, Helen McDonald, Gwyneth Paltrow and Reese Witherspoon.

Morgan asked Rush, who also served as executive producer of "The King's Speech" and spent 12 years trying to get the film made, if he'd practiced his best "loser face" in case he does not win the best supporting actor Academy Award on February 27.

"If you do happen to be lucky enough to be sitting in that little televised box," said Rush, "you know, it's probably the best acting you have to do in your entire career."

"Somebody told me you're supposed to keep your mouth open because your mouth will fall open anyway," said Firth, who is nominated for best actor. "You paste on the smile." Firth also pointed out that there's also "the 'of course' face."

"You have got that camera up your snout at that moment," he said. "So it's not -- in some ways you're not even really thinking much about the award."

But Firth did admit that, "No one would not want to win that statue, you know? Nobody."

Morgan asked if he dreamed of winning an Academy Award, practicing and preparing his speech.

Firth said that at the moment he was focused on "how to get out of this interview unscathed. That's my dream."