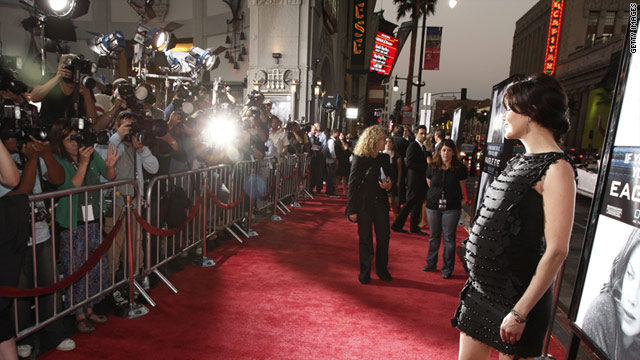 In Hollywood, little is private for celebrities -- including their pregnancies, labor and deliveries.
STORY HIGHLIGHTS
RELATED TOPICS

(CNN) -- After years of tabloid photos of celebrities buying coffee, going to the gym and occasionally flashing the camera as they step out of cars, there's not a whole lot that is private in Hollywood anymore -- including childbirth.

Within the last week, we learned all about what happened as Miranda Kerr gave birth to little Flynn -- "it was a long, arduous and difficult labour," she wrote on her blog, "without any pain medication" -- and how Kelly Preston gave birth in November to baby Benjamin using the "silent birth" technique.

"Silent birth is basically just no words, as much as possible," she explained on the "Today" show when asked what exactly it is. "If you need to moan, if you cry out, you know, all of that, of course that's normal."

Meanwhile, in reality-TV-land, Kimora Lee Simmons, Kendra Wilkinson and, perhaps most memorably, Kourtney Kardashian have all brought cameras along for the ride in the delivery room. Who can forget that moment last February when Kourtney gamely reached down and assisted in her own delivery, pulling her child up from between her legs on the season finale of "Keeping Up with the Kardashians"?

Any celeb news junkie can name many, many more. There was the time when Erykah Badu's 2009 delivery was live-tweeted -- she kicked off the festivities by tweeting, "Morning, I'm in labor" -- and the Vogue magazine interview in which Gisele Bundchen described meditating her way through labor at home in a water-filled tub overlooking the Charles River in Boston. Reality TV star Bethenny Franklin, meanwhile, has recalled the intense bagel craving that preceded a nearly 30-hour labor to deliver her daughter last May.

Even the most mundane minutiae, like Jessica Alba's decision to bring "shea butter, scented candles and meditation music" to the hospital when she was giving birth to her daughter Honor, are par for the course.

At this point, we've reached a sort of pseudo-reality with our stars -- they're still expected to be glamorous and appear to live a life that's more fantasy than reality, but we still eagerly hope for famous moms (and dads -- Sir Elton John's not staying hush-hush either) to keep the doors to their lives wide open, from conception to baby's first steps.

And why shouldn't they? What they're revealing is the same way we all got here, after all, not to mention that it's a life-changing event. But this kind of openness? Well, welcome to the "mega-information age," as E!'s chief news correspondent, Ken Baker, puts it.

While he jokes that we may have "reached a new level of celebrity disclosure and TMI when Kourtney Kardashian gave birth on the reality show," the truth is that celebs are "public people whose personal lives are very attentively covered. Someone giving birth is up there with one of the biggest personal life moments, so it makes sense that a fan would be fascinated and want to know everything."

And we mean everything.

"Anytime any celeb talks about their pregnancy, birth, nursing, how they're raising their baby ... we want every tidbit that these celebrities are willing to share," says People magazine senior writer Joey Bartolomeo, whose publication dedicates a blog to celebrity babies and moms.

"People look at celebrities as living in this rarefied world that's totally different and aspirational for some people, and you get a glimpse inside of that," Bartolomeo says of stars pulling back the hospital curtains on their deliveries. "You get a glimpse inside this special universe that not everyone is a part of, and when you get to hear what their pregnancy is like or what their birth is like, it's like a little peek into their world. You don't always hear about the less glamorous."

Not everyone is willing to share those bits of info though. Javier Bardem and Penelope Cruz, who on Wednesday confirmed the birth of their son, had everyone breaking the news before they did. So what some stars are doing, Baker says, is being up-front about their lives themselves.

"There's nothing worse than misinformation," Baker says. "When you don't answer the basic questions, a lot of the rumor mills that are out there -- especially on the internet -- will spin a fantasy story. So the celebrity will just say, 'Here it is.' Celebrities, instead of fighting the beast, are taming it by playing along with the beast."

It's gotten to the point, he notes, that a celebrity not allowing the public to get up close and almost-too-personal is considered odd.

"When you have a situation like Nicole Kidman and Keith Urban saying 'we've had a baby [via a gestational carrier]' you have people going 'What? You had a baby for two weeks and didn't tell us?!' They're considered abnormal for not sharing that news with the public," Baker adds. "People used to make a big deal about how Oprah was always over-sharing and telling so much, but that's the norm now."

Indeed, the likelihood of Debbie Reynolds revealing the details of daughter Carrie Fisher's birth back in 1956 -- which Fisher herself later detailed in her memoir, "Wishful Drinking" -- was far more slim. (If you take a look back at the news reports of that day, they mention little more than Fisher's sex, date of birth, location and the fact that Reynolds and then-husband Eddie Fisher were "racing the stork" to the hospital.)

"In the days of our grandparents and parents, you were just a movie star. You didn't veer away from that sex kitten image," explains Kym Douglas, author of "The Black Book of Hollywood Pregnancy Secrets." "The opposite is true now. The audience is much more intelligent, knowing that just because you play a hot, sexy woman doesn't mean you can't build a family."

Adds Bartolomeo, "(Pregnancy) used to be something that was hidden, and now it's completely celebrated. We're so excited to see these pregnant stars on the red carpet; Jennifer Lopez was doing concerts when she was pregnant. It's showing that the culture has evolved in that way."

But something else has changed, too, she says -- and it's not always nosy reporters digging for dirt that lead to new-arrival-overshare.

"So many celebrities have their own blogs and websites, and they're actually putting the information out there themselves often -- it's not just coming out there in an interview," she explains. "It's its own niche, and people love to read about how people are doing with their kids and raising their kids, especially when babies are born. Any little detail, there's interest."

Mary Fischer, a parenting blogger and mom of one, says that she was certainly one of the fans seeking more info when she carrying her son, who is now almost 5.

"When I was pregnant, I wanted every piece of information I could get," Fischer says. "You're looking to hear what other people are going through to validate your experience. It's refreshing when you get someone who is honest, like Kendra Wilkinson -- she showed her (post-baby) stomach on TV; she didn't leave the hospital in skinny jeans."

Besides, she adds, "They're everywhere in the public eye; you feel like you know them a little bit."

And as we gear up for another celebrity baby boom -- Natalie Portman, Mariah Carey and Marion Cotillard are just a few of the expectant stars -- E!'s Ken Baker sees no sign of the delivery-room info-train slowing down.

"When it comes to the depth of information on celebrities' personal lives, once you turn the faucet on, you can't turn it back off," he says. "A pregnancy is such a major life event -- their life is going to be different. For people who are followers of their lives, they're going to want to know about that key moment."