Miss America 2011 is youngest since rules changed in 1938 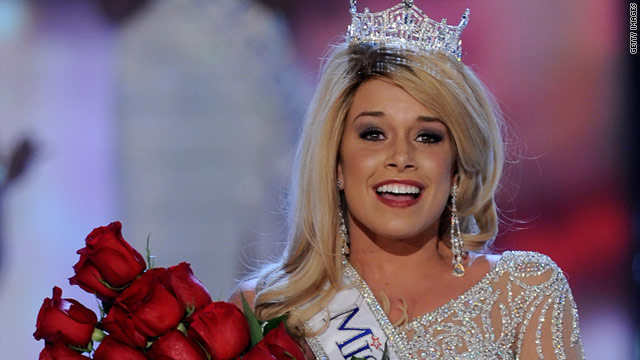 (CNN) -- Teresa Scanlan of Nebraska will spend the next year as Miss America after besting 52 other pageant hopefuls at Saturday's event in Las Vegas.

The 17-year-old Gering resident and Scottsbluff High School student played the piano during the competition. Her platform issue was tackling eating disorders. She hopes to attend law school, become a judge and eventually a politician, according to the Miss America website.

The other four finalists were Emoly West of Oklahoma, Jacquie Brown of Washington, Jalee Fuselier of Hawaii and Alyse Eady of Arkansas.

Scanlan is the youngest winner since the pageant instituted age requirements -- between 18 and 28 starting in 1938. The age limit changed again in 1993 to 17 to 24. In 1933, for instance, when there was no upper or lower age limit, 15-year-old Marian Bergeron of Connecticut captured the title.

This year's contest was the 90th anniversary of the Miss America pageant. Margaret Gorman became known as the first Miss America after winning a pair of contests in 1921 -- one consisting of women deemed most popular based on photos shown in various East Coast newspapers and the other for the so-called Golden Mermaid trophy.

Today judges rate contestants on talent, appearance and demeanor based on performances, interviews and evening wear and swimsuit competitions.

The pageant, which is distinct from the Miss USA crown, aims "to provide personal and professional opportunities for young women to promote their voices in culture, politics and the community," according to the Miss America website.