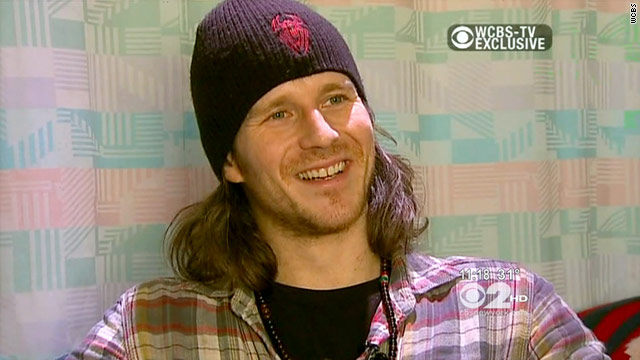 "I'm not worried about it," Christopher Tierney said of safety concerns surrounding the show. "They've got it well taken care of."
STORY HIGHLIGHTS

New York (CNN) -- A Broadway actor who fell more than 20 feet during an aerial stunt in the musical "Spider-Man: Turn Off the Dark," will attend Friday's 8 p.m. performance as a spectator, according to show spokesman Sam Corbett.

Christopher Tierney, 31, was released from New York University's Rusk Institute of Rehabilitation Medicine on Wednesday, after suffering four broken ribs; a hairline skull fracture; a broken shoulder blade; a bruised lung; three cracked vertebrae,and broken bones below his elbow as a result of his fall, according to his father.

"He is up," Tim Tierney said of his son, discharged from New York's Bellevue Hospital on December 28. "He is walking and just doing very well."

Several of the performances were canceled following the December 20 incident, as new safety measures were put in place following a meeting with officials from the Department of Labor and the Occupational Safety and Health Administration.

The behind-the-scenes drama at the $65 million production ­-- including a series of mishaps resulting in actor injuries -- has continued to raise questions over its safety record.

The younger Tierney said Tuesday he was looking forward to returning to the show and not concerned about his safety.

Another actor in the show, Patrick Page, said the new measures have increased communication between actors and safety personnel.

The show, with music and lyrics by U2's Bono and The Edge, is said to be the most expensive in Broadway history.