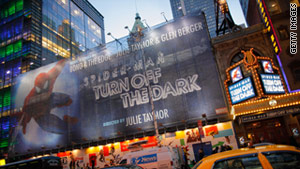 New York (CNN) -- The troubled musical "Spider-Man: Turn Off the Dark" announced a replacement early Tuesday for Natalie Mendoza, who played villainous Arachne but officially dropped out after suffering a concussion during a performance last month.

"She is fantastic," said producer Michael Cohl added. "When she was covering the role, we kept seeing the crowd leap to its feet as she took her bow. After about the sixth or seventh night, we realized we'd be fools not to give her the part."

Carpio appeared in the movie 'Across the Universe,' which was directed by "Spider-Man" director Julie Taymor.

"It has been a difficult decision to make, but I regret that I am unable to continue on 'Spider-Man' as I recover from my injury," Mendoza said in a statement last week. "I wish Julie and the cast and crew every success with this production."

The behind-the-scenes drama at the $65 million production has held enough twists and turns to rival the actual plot of the Broadway show.

Several of the shows were canceled following Tierney's fall, and new safety precautions were put in place before they resumed following a meeting between the show's company, the Occupational Safety and Health Administration and the New York State Department of Labor.

But Tierney said Tuesday that he is looking forward to returning to the show and is not concerned about his own safety.

"I'm not worried about it," Tierney said. "They've got it well taken care of."

Another actor in the show, Patrick Page, said the new measures have increased communication between actors and safety personnel.

"When you have somebody injure themselves, as Chris did, then everybody feels a little bit on edge at first," he said. "It's great to have him have a full recovery and for us to all be able to do our work."

The show, with music and lyrics by U2's Bono and The Edge, is said to be the most expensive in Broadway history. It officially opens on February 7.