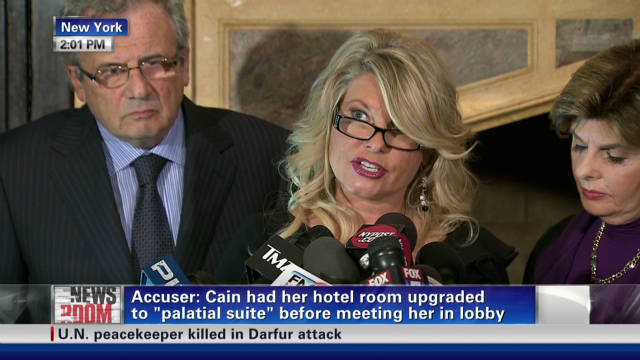 (CNN) -- A Chicago woman said Monday that Herman Cain sexually groped her in 1997 when Cain was head of the National Restaurant Association.

Sharon Bialek made the claims during a press conference with famed defense attorney Gloria Allred.

Bialek is the fourth accuser to come forward with allegations of inappropriate behavior by Cain.

Three other women have alleged Cain harassed them when they worked for the National Restaurant Association while he headed the group in the 1990s. Allred said that the woman at the news conference isn't one of those three.

Allred says the alleged harassment took place when her client sought Cain's help with an employment issue while she was working at the association.

"All allegations of harassment against Mr. Cain are completely false," said a statement from Cain's campaign after Bialek's accusation. "Mr. Cain has never harassed anyone."

Politico first published a report last week claiming that two female employees at the restaurant association accused Cain of inappropriate behavior during his tenure there. The women, according to Politico, each received separation packages in the five-figure range.

The package for one of the women totaled between $32,000 to $37,000 -- about equivalent to her annual salary at the time, according to a former National Restaurant Association employee who knows one of the accusers.