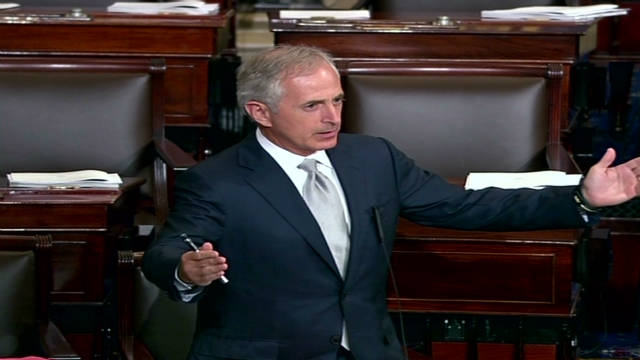 Washington (CNN) -- An emotional debate on the Senate floor Thursday night is putting a microscope once again on the political games in Washington that Americans overwhelmingly detest.

In a rare, direct exchange between Senate Republican Leader Mitch McConnell and Democratic Leader Harry Reid on the floor of the chamber, both senators vented frustration during a testy debate on the China currency bill.

Norm Ornstein, a congressional scholar at the American Enterprise Institute, thinks that those frustrated senators are mirroring an angry American electorate.

"If you came to the Senate to do things and you're mired in this bulls*** where most of your time is spent spinning wheels or just kind of like a sumo wrestler pushing against the other wrestler in the ring and neither of you moves, that gets frustrating" he said.

Sen. Bob Corker, R-Tennessee, said Thursday night that "members on both sides of the aisle feel like this institution has degraded into a place that is no longer a place where any deliberation at all."

That sentiment from the public is something that may have contributed to the tense back and forth on the floor, when a final vote on a China currency bill was tabled until next week. The debate was focused over the rights of Republicans, the minority party, to offer amendments to bills.

Senate Minority Leader Mitch McConnell protested that the "minority is out of business," while Senate Majority Leader Harry Reid shot back, "Let's get back to legislating as we did before the mantra around here was "defeat Obama."

Ornstein said that in the past Reid and McConnell have tended to keep a pretty good relationship. But now, 13 months before the election, they know that they each are playing very different roles.

Democrats accuse Republicans of being the party of "no" -- shooting down any plan the president is in favor of. The tension has been especially strong in the past few months over the debt ceiling debate and government funding, to name a few.

"It's pretty clear that what we're getting in the Senate is a relentlessly persistent game of hardball," Ornstein said.

He added that Obama's tense relationship with Congress is creating a lot more discomfort among Republicans. The reason? They don't want to be on the defensive.

In the case of the China bill, which has strong bipartisan support, Republicans were frustrated because Democrats blocked them from offering several amendments, including one on the Obama's jobs bill, which Democrats opposed debating at the time.

Democrats, then, were upset because Republicans refused to give up the jobs amendment and therefore prevented debate on any other amendments.

Then, late Thursday, Democrats surprised Republicans by jamming through a rule change -- something that only requires 51 votes -- to prevent senators in some situations from moving to suspend the rules and offer amendments.

Democrats said their precedent setting rule change was needed because they feared some Republicans would bottle up passage of the China bill through an endless number of motions to suspend the rules, something Republicans denied.

Reid defended the rule change saying it was aimed at expediting debate, adding that an open-ended amendment process is preferable, but in recent times it had become "a road to nowhere."

Ornstein said that what happened in this case was McConnell decided that, one way or another, he was going to get a vote that he could interpret and put out there to embarrass Democrats who had voted against the president's job plan, and to try and take some of the heat of the notion that Republicans were blocking that plan.

In the end, senators agreed to take a cooling off period over the extended Columbus Day weekend and vote on the China bill and the president's jobs bill when they return next week. Reid announced he hoped to soon convene a private caucus of all senators, in which they could further discuss and work out their differences.

Senate Historian Don Ritchie said that what Reid did on the Senate floor -- and the enduring debate over rules -- is something senators on both sides of the aisle have used since the 18th century.

"The Constitution gives the Senate the right to set its own rules exclusively -- no one else can do it," Ritchie said. "So they've been fighting over those rules since 1789. ... Last night was part of a long continuum though a different variation."

Ritchie said Reid followed the rules. The bigger issue, he said, was the surprise move.

"Generally the leaders of the two parties signal their moves in advance to each other," he said. "Senator McConnell certainly signaled what he planned to do. Senator Reid triggered his response and I'm not sure they were expecting that. That may be a large reason why there was such an uproar."

The move has created an unease among senators frustrated with getting bills passed in the Senate --the chamber often described as a place where legislation goes to die.

But the intense debate Thursday, one Democratic senator said, was cleansing, like letting off some steam.

"Sometimes you have to do stuff like this - have to have a catharsis of some sort. Just let it rip. The beauty of it was it was all on the Senate floor and carried all over the country. So people saw us at our worst and I saw us at our potential best," he said.