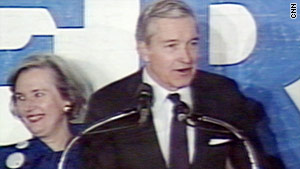 (CNN) -- Former U.S. Sen. Charles Percy, a prominent Illinois Republican who served in the Senate for nearly 20 years and became chairman of the Foreign Relations Committee, died Saturday, said a spokesman for Sen. Jay Rockefeller, a relative. He was 91.

Percy, a one-time rising star in the Republican Party who was once considered a potential presidential candidate, was elected to the U.S. Senate in 1966 and served until 1985.

His daughter, Sharon, the wife of Rockefeller (D-West Virginia), spoke publicly in 2009 of her father experiencing Alzheimer's disease. She made those remarks before the National Alzheimer's Association.

Born in Florida and raised in Chicago's far north neighborhood of Rogers Park and the well-to-do suburb of Winnetka, Percy was regarded a business wunderkind who rose to become the president, CEO and board chairman of Bell & Howell, a manufacturer of made home-movie cameras and electronic consumer products. He became president at age 29.

He was appointed as President Dwight Eisenhower's personal representative to presidential inaugurations in Peru and Bolivia with the rank of special ambassador in 1956.

After an unsuccessful run for governor of Illinois in 1964, he successfully ran for the U.S. Senate two years later.

While campaigning in 1966, Percy's other daughter, Valerie, Sharon's twin, was murdered at age 21 in the family's Kenilworth, Illinois, home, a crime that shocked Illinois and the nation. The murder is unsolved, but remains a vivid memory for many residents of Chicago and Illinois who knew Percy.

While in the Senate, Percy emerged as an antagonist to President Richard Nixon, also a Republican, when Percy called for a special prosecutor to investigate Watergate, the political scandal that eventually culminated in Nixon's resignation.

Percy considered running for the 1976 presidential nomination, but he backed off after Nixon resigned in 1974 and after Vice President Gerald Ford became the new president and decided to seek the 1976 nomination himself.