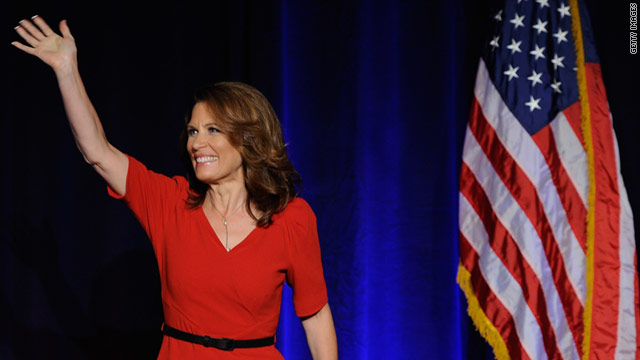 (CNN) -- Republican presidential contender Michele Bachmann defended her position on gay rights, the HPV vaccine and the debt ceiling as she made her debut on "The Tonight Show with Jay Leno."

Bachmann has more usually been the butt of Leno's jokes -- a point he made as he thanked her for being a good sport.

"We've done a million jokes. Hopefully, you haven't been ... watching any of them," he said, as she joined him on set.

But Leno largely skipped the jokes Friday as he quizzed the Minnesota congresswoman on her political positions.

First up was the issue of the HPV vaccine, a subject on which Bachmann hit fellow Republican contender and Texas Gov. Rick Perry hard in this week's CNN/Tea Party Republican Debate.

Perry signed an executive order in 2007 that required Texas schoolgirls to receive vaccinations against the sexually transmitted HPV, although it wasn't implemented.

Bachmann told Leno that Perry's action had been "an abuse of executive power" and had sparked concern over "crony capitalism," an apparent reference to the fact that a former Perry aide was a top lobbyist for Merck, the manufacturer for the HPV vaccine. Merck donated to Perry's campaign fund.

She added: "The concern is that there's, you know, potentially side effects that can come with something like that. But it gives a false sense of assurance to a young woman when she has that that if she's sexually active that she doesn't have to worry about sexually transmitted diseases."

Leno responded: "Well, I don't know if it gives assurance. It can prevent cervical cancer; correct?"

He then pressed Bachmann over comments she made earlier this week in which she said a woman had approached the congresswoman to say her daughter had suffered "mental retardation" as a result of receiving the vaccination.

There had been no recorded cases of such side effects despite 30 million people receiving the jab, Leno pointed out.

The former tax attorney and mother of five, who won the Iowa straw poll last month but has seen her poll ratings slide since Perry entered the race, also defended two clinics she runs with her husband, offering what she said was a Christian counseling service.

The clinics have come under fire over claims they use a controversial therapy that encourages gay and lesbian patients to change their sexual orientation.

Asking Bachmann why gay people shouldn't have the right to be happily married, Leno said: "That whole 'pray the gay away' thing, What? I don't get that."

Bachmann said the clinics did not discriminate, but repeated her position that marriage should be between a man and a woman.

Quizzed on her opposition to raising the debt ceiling, Bachmann said she would have taken the same position whether it had been President Barack Obama or George W. Bush in power.

On Afghanistan, Bachmann failed to answer whether she thought American forces should withdraw, but paid tribute to the "unbelievable job" done by U.S. service men and women there.

Leno's final question was whom Bachmann would pick as a running mate if she wins the Republican nomination, suggesting she might want someone more moderate to balance her views.

Leno replied: "Well, we'd probably have an argument over that gay thing."