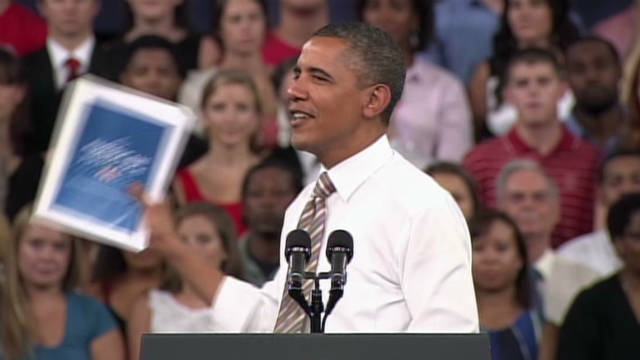 Obama: 'This isn't about me'
STORY HIGHLIGHTS

Raleigh, North Carolina (CNN) -- President Barack Obama took the push for his $447 billion jobs plan to the politically pivotal state of North Carolina Wednesday, telling an enthusiastic college crowd that it's time to "finally get Washington to act."

"If you're in favor of America's job creators, this is your bill," Obama told an audience in a campaign-style setting at North Carolina State University in Raleigh. "The time for hand-wringing is over. ... We've got to pass this bill right away."

The president made a similar plea during visits to Ohio on Tuesday and Virginia on Friday. All three states -- Ohio, North Carolina and Virginia -- were carried by Obama in 2008 but are considered up for grabs in the 2012 presidential race.

Obama's economic plan -- unveiled last week and presented to Congress on Monday -- calls for targeted tax cuts, infrastructure spending and new job training assistance that would be paid for by ending tax loopholes for corporations and American families earning more than $250,000 a year.

Top congressional Republicans have said they are open to some aspects of the president's jobs plan, but rejected Obama's proposal to pay for the measure with what they labeled tax increases.

"Republicans are ready to go to work with the president to create an environment that makes it easier and cheaper to create new jobs," Sen. Lamar Alexander, R-Tennessee, said Wednesday. But "while the president's talking about jobs, his administration is making it harder and more expensive to create jobs."

"We see permanent tax increases put into effect in order to pay for temporary spending," Boehner said. "I just don't think that's really going to help our economy the way it could."

House Majority Leader Eric Cantor, R-Virginia, indicated legislators can agree on expanded tax breaks for small businesses and rolling back some regulations. But House Republicans will oppose having the wealthy pay more in taxes to fund the jobs plan, he said.

"Republicans are not going to accept tax increases if the goal is to grow the economy," he stressed.

Senior administration officials said Tuesday that Obama is prepared to spend most of the rest of 2011 making his case for Congress to pass the jobs plan. Among other things, the president will schedule another bus tour like a recent three-state swing and target regional media outlets with advertisements, the officials said.

CNN's Tom Cohen and Alan Silverleib contributed to this report.