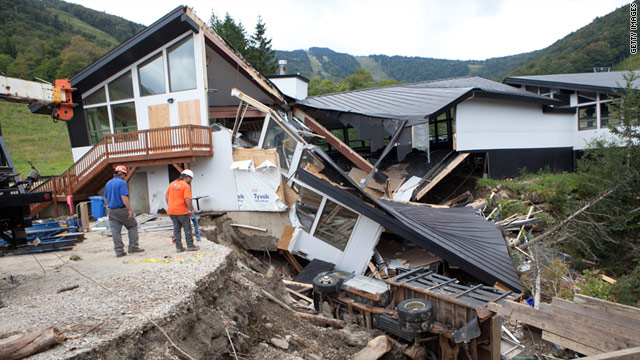 Inland Vermont was one of the hardest-hit states when Hurricane Irene marched up the East Coast in late August.
STORY HIGHLIGHTS
RELATED TOPICS

The measure, called a continuing resolution, would take effect October 1 and expire on November 18, providing a window for Congress to pass spending bills for the rest of fiscal year 2012, said Rep. Hal Rogers, R-Kentucky, the committee chairman.

According to a committee statement, the proposal would fund the government's discretionary spending for that seven-week period at a level consistent with annual spending of $1.043 trillion, which it said was the amount agreed to by Congress in the debt ceiling deal passed last month.

The measure includes $3.65 billion in extra money for the Federal Emergency Management Agency, which is running out of disaster relief money following Hurricane Irene, Tropical Storm Lee, the Virginia earthquake, wildfires and a series of devastating tornadoes, the committee statement added.

Of the the total, $1 billion would be available for disaster relief needs from the current fiscal year, with that spending offset by cutting a Department of Energy loan program for manufacturing high-technology vehicles, the statement said. Rogers noted that FEMA would get additional money in the coming appropriations bills as well.

The House is expected to take up the measure next week. If passed, the continuing resolution also would require Senate approval to be sent to President Barack Obama's desk.

"The American people simply do not want or deserve -- and our recovering economy can scarcely handle -- the dangerous instability of a government shutdown, or any unnecessary holdups in disaster recovery efforts," Rogers said in the statement.