How CNN's analysts scored the debate 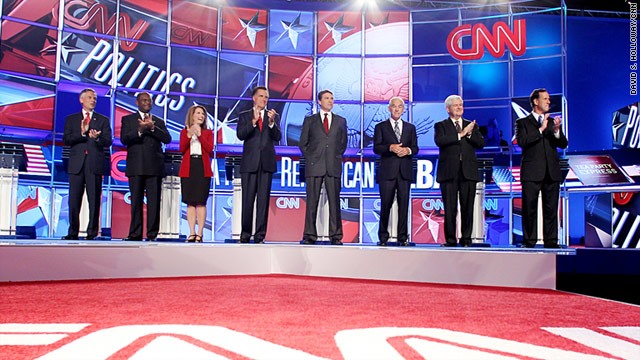 (CNN) -- Going into Monday night's CNN/Tea Party Debate, the anticipation was that the two frontrunners -- Texas Gov. Rick Perry and former Massachusetts Gov. Mitt Romney -- would continue their argument over who created more jobs or whose position on Social Security was more electable.

But early on it became clear that Perry, who holds a double-digit lead over all of his rivals, would be everyone's target and one-time frontrunner Romney tried to bring Perry back closer to the pack and his other rivals tried to score points at the governor's expense.

Who scored and who didn't?

Dana Loesch, CNN contributor and conservative talk show host: I think the overall standout, Romney and Perry really went at each other, they shot each other in each other's foot. I think [U.S. Rep. Michele] Bachmann ultimately had some of the most solid answers of the night. If she expected to stay in or be in the top tier of candidates in this primary, she needed to be aggressive, hard-hitting and go after other candidates. That's what she did.

The best of the GOP debate zingers

"Overall, I would give it to Bachmann. [Newt] Gingrich always does well, but he's been doing it for an incredibly long time. In terms of jobs, whenever Herman Cain spoke, every single time he spoke, he backed it up with a plan that he's already published on his website.

Paul Begala, CNN contributor and Democratic strategist: "This is, in fact, I think long-term, strategically, the real Achilles heel for governor Perry, that is where Michele Bachmann took it -- she took it to 'crony capitalism.' She's trying to suggest that Rick Perry will depart from conservative values if there is money to be made for lobbyists. If this notion begins to take hold that Perry might sell out those conservative principles because he's connected to a lobbyist, then Mrs. Bachmann may get back into the race, Mr. Romney may start to press this. When I talk to people in Texas, they think his Achilles heel is cronyism and pay to play.

David Gergen, CNN senior political analyst: "There's no question that Romney and Perry will remain the frontrunners Romney has a better command of the facts. He's a more practiced debater. He gave one of the best answers of his entire campaign when he was asked how he would balance the budget. But Perry has the command presence, and even though people took shots at him as you said, he deflected reasonably well, he came in as a better debater, he was more even this time.

"He talks a lot of Texas. He's going to need to move beyond Texas. He's clearly going to have to beef himself up on the international side. I would have to tell you, Rick Perry walked in here as a frontrunner tonight. And I imagine he walked out as the frontrunner.

Erick Erickson, CNN contributor and RedState.com blogger: "I think this may be the first debate where Mitt Romney didn't come out the clear winner. Perry needed to do well. I think he did well. I don't think the Social Security exchange helps Mitt Romney at all at a Republican primary. He's foolish to continue, and he may want to go after Perry on immigration or HPV. I think the majority of Republican voters agree with Perry. For the life of me, I can't understand why Romney would go with this. [Michele] Bachman was going to make this a key point and backed down from this."

Gloria Borger, CNN chief political analyst: "I think that Mitt Romney started chipping away at the economic miracle of the state of Texas. And it's clear he's going to continue to go back at that. He said, you know, when you're dealt four aces, it's easy to win the hand. And I remember that happening with [1988 Democratic presidential candidate] Michael Dukakis, talking about the 'Massachusetts Miracle.' They started chipping away at that, it was a big problem for him."

On the ideological battle within the Republican Party

Paul Begala, CNN contributor and Democratic strategist: "Mitt Romney was cool, Rick Perry was hot. Mitt was factual and Rick was a little more emotional. It was really an interesting study in contrast. The real question is, which party? Not who won, but which party? If this is still the party of investment bankers who carry a putter at the country club, then Mitt Romney wins. If it's people carrying a pitchfork to a tea party rally, Rick Perry wins. In the hall it sure sounded from the audience, a strikingly conservative, almost radically conservative audience which helps Rick Perry."

Ari Fleischer, CNN contributor and former President George W. Bush press secretary: "Perry's gamble is that the American people want to push for greater change in entitlement programs, that they're ready for something fundamental. Mitt Romney's gamble is that they don't want to do anything bigger fundamental, they really just want an expert to go in and change things around the edges and make some smart reforms.

"Who is going to be ascendant? Will it be the tea party movement to change Washington or the more conventional traditional Republican -- keep what's there, make it a little better, a little more cost-efficient. This is the dynamic in play right now."

Borger: "I think what you're seeing is this fight within the Republican Party, I couldn't help but watch the debate and you saw Jon Huntsman and Mitt Romney, they looked like the old-time, establishment Republican candidates struggling to kind of say, 'OK, this is the way we're going to take the party.' Mitt Romney, it's his turn to be nominated, he ran last time.

"And then you saw the other candidates, they're saying, 'Wait a minute, wait a minute, we're not going to go along with you.' And then you saw Rick Perry, essentially trying to walk both sides of that, saying, 'You know what, yes, we passed the DREAM Act in my state. Yes, I ordered this vaccine for young women,' something that tea party folks do not like, conservative Republicans don't like.

"Trying to walk both sides of that, and come across as somebody who can appeal to independent voters while also appealing to tea party Republicans. That's very difficult, but that's what I think we saw Rick Perry try to do, and we're going to continue to see him try to do that as he has to look at the general election."

On how this will play out into the general election

Fleischer: "I think that Republicans have to be careful here that Social Security does not become the defining issue that divides them in this primary. They have to remember in these debates to bring it back to Barack Obama, to jobs, to debt and deficits. This is the core strength that have made Republicans so strong in this cycle. The bigger perspective cannot be lost as these debates continue."

Roland Martin, CNN contributor: "If you're a Latino voter, the last thing you wanted to hear was some of the stuff you heard tonight. Colorado, Arizona, New Mexico will be critical states when it comes to November 2012. The GOP did themselves no favors tonight with Latino voters.

"Education did not come up in this debate at all. The only moment it came up was about abolishing the Department of Education. If you're a parent trying to get your kid educated, not a single candidate offered anything to speak to the crisis we have in this country when it comes to education. Major failure in that."