Perry comes under fire at the CNN/Tea Party debate 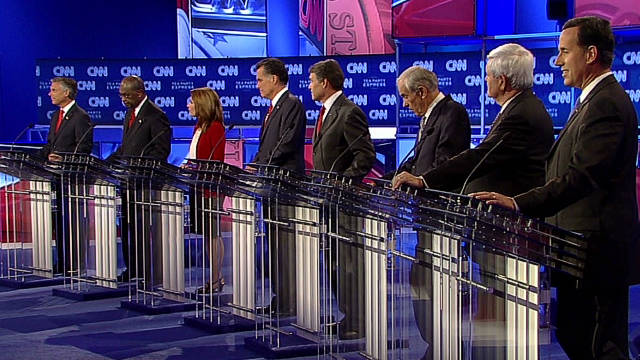 Tampa, Florida (CNN) -- With Texas Gov. Rick Perry threatening to cement his standing atop the national polls, his rivals for the Republican presidential nomination aggressively sought to undermine his conservative credentials on Monday during the first-ever CNN/Tea Party debate in Florida.

Perry repeatedly found himself in the crosshairs, as the field of candidates took turns attacking his positions on illegal immigration, Social Security, and his controversial 2007 push to vaccinate Texas schoolgirls against human papillomavirus, a common sexually transmitted disease that can lead to cervical cancer.

Minnesota Rep. Michele Bachmann, whose standing among Republicans has slipped dramatically since Perry entered the race, said she was "offended" by Perry's executive order, which included an opt-out provision for parents who did not want the vaccine.

"To have innocent little 12 year old girls to be forced to have government injections through an executive order is just flat-out wrong," Bachmann said.

"This is big government run amok," Santorum said to applause. "It is bad policy and it should not have been done."

Perry said he regretted his decision to push for the vaccine using an executive order, but said he was standing up against cancer.

Perry was also attacked by his opponents for signing the Texas DREAM Act in 2001, which granted in-state tuition to some children of illegal immigrants.

And former Massachusetts Gov. Mitt Romney chided Perry for referring to Social Security as a "Ponzi scheme" and vowed to protect the program. Romney called such language "over the top" and said that Perry wrote in his book "Fed Up!" that the entitlement program is unconstitutional.

Perry said Romney is trying to "scare" seniors who rely on the federal program.

When Romney persisted on the constitutionality question, Perry said the nation needed to have a serious conversation on the issue, which prompted Romney to cut him off by saying "we're having that conversation right now, governor."

Other candidates then joined in, with former House Speaker Newt Gingrich earning applause from the crowd of conservative tea party supporters by saying the issue wasn't about who was scaring senior citizens when, he said, President Barack Obama was scaring the nation every day.

Bachmann and Perry squared off on the vaccination situation, with Bachmann saying, "We cannot forget that in the midst of this executive order there's a big drug company that made millions of dollars because of this." She added that a former Perry aide was a lobbyist for the company and asked if the issue was about saving lives or money.

Perry responded that the company, Merck, made a $5,000 contribution and said to Bachmann: "If you're saying I can be bought for $5,000, I'm offended."

"I'm offended by what happened to all those girls, " Bachmann said of the required vaccination of girls as young as 12 against cervical cancer.

Perry also said that the executive order was a mistake and he should have worked with the legislature instead of issuing it. He also noted the order gave parents the right to opt their children out of the vaccination.

The debate at the Florida State Fairgrounds in Tampa gave the other candidates on the stage a chance to change what many are portraying as a two-person race between Perry and Romney.

Perry, the new guy in the race and the current front-runner in the national polls, and Romney, the previous front-runner in the GOP battle, sparred over jobs and Social Security at a debate last week at the Reagan Presidential Library in Simi Valley, California.

They continued the battle Monday. When Blitzer noted Perry's success creating jobs in Texas, Romney cited what he called advantages to accomplishing such success in that state, including no income tax, lots of oil and a Republican-controlled state legislature.

"If you're dealt four aces, that doesn't necessarily make you a great poker player," Romney said in the best zinger of the early going.

If voters believe all of America is like Texas, then they should choose someone with success in Texas, Romney continued, adding that if voters believe the nation needs to be turned around, "that's what I do."

Perry responded to Romney: "You were doing pretty good until you got to talking poker."

In the California debate last week, Perry stood by earlier comments that Social Security is a "Ponzi scheme" and that it was a "monstrous lie" to tell young workers that the 74-year-old pension system would be there when they retire.

Perry's team fired back, noting that in Romney's policy book "No Apology," the former Massachusetts governor compared the management of Social Security to a felony. When that issue came up Monday, Romney said Perry was misquoting him from the book.

In a a USA Today op-ed released Monday by Perry, he declined to use the phrase "Ponzi scheme" but called for a "frank, honest national conversation about fixing Social Security to protect benefits for those at or near retirement while keeping faith with younger generations, who are being asked to pay."

Bachmann, who is vying for tea party support with Perry, also has tried to inject herself into the Social Security discussion.

Monday's debate was crucial to Bachmann, who has dropped in national polling since Perry launched his campaign on August 13, the very same day that she won a crucial straw poll in Ames, Iowa.