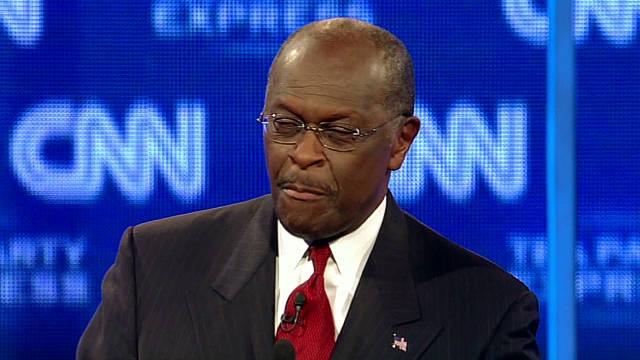 (CNN) -- When the Republican candidates were asked what they would bring to the White House if elected, Georgia businessman Herman Cain set himself apart from the career politicians on the stage with him by replying: "I would bring a sense of humor to the White House, because America's too uptight!"

He could have been describing the others on stage with him Monday night at the GOP presidential candidate debate sponsored by CNN and The Tea Party Express. Here is how they answered the same question:

Former Sen. Rick Santorum of Pennsylvania: Well, mine is pretty obvious. Karen and I have seven children, so we'd add a bedroom or -- and some beds to the White House.

The best of the GOP debate zingers

Texas Rep. Ron Paul: I'd bring a bushel basket full of common sense. And I would also bring a course in Austrian economics to teach the people the business cycle and why the Fed creates inflation and depressions and all our unemployment problems.

Texas Gov. Rick Perry: It's simple. I'm going to bring the most beautiful, most thoughtful, incredible first lady that this country's ever seen, Anita.

Former Massachusetts Gov. Mitt Romney: You know, one of -- one of my heroes was a man who had an extraordinary turn of phrase. He once said about us, he said, you know, you can count on the Americans to get things right after they've exhausted all the alternatives. And now and then we've made a couple of mistakes. We're quite a nation. And this man, Winston Churchill, used to have his bust in the Oval Office. And if I'm president of the United States, it'll be there again.

Minnesota Rep. Michele Bachmann: I would bring a copy of the Declaration of Independence, the Constitution of the United States, the Bill of Rights, and that's it.

Former Utah Gov. Jon Huntsman: And to play to that theme -- my wife's going to kill me for saying this -- but I would bring my -- as a 40-year motorcycle rider, I would bring my Harley-Davidson and my motocross bike.