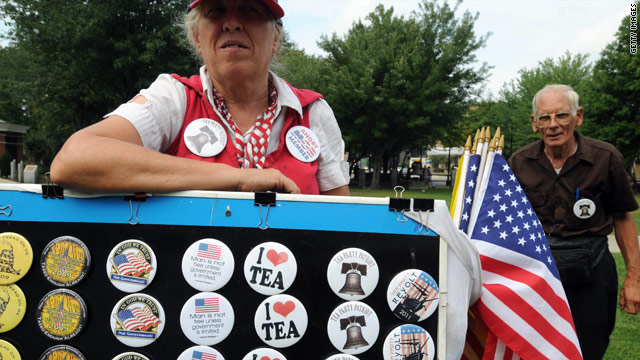 Manchester, New Hampshire (CNN) -- On Sept. 12, 2009, frustrated tea party citizens from across the country marched upon the Capitol in Washington, energized by a shared sense of disenfranchisement in the political system and anger at a federal government they believed was taxing too much and racking up a dangerous amount of debt.

Two years later, much has changed. A powerful coalition of tea-party-backed freshmen walks the halls of Congress, where they have unsettled the establishment and pushed their own party to the right. On the campaign trail, the support of tea party groups has helped launch campaigns and is a force candidates ignore at their peril.

For those who doubt the movement has moved toward the mainstream, the Tea Party Express will join CNN on Monday night to host a nationally televised forum where eight GOP presidential candidates will vie for tea party support.

The loose affiliation of activists is making the transition from upstart outsiders to a force trying to affect change from within, putting different pressures and expectancies on the movement.

"We're not a protest movement anymore; we've morphed into something else," said Matt Kibbe, president of FreedomWorks, which has helped support tea party groups around the country. "We're a get-out-the-vote machine. We're organizing at the community level."

Expanding on its 2010 congressional election victories, the tea party has become a major factor in the presidential race this election cycle. Former Massachusetts Gov. Mitt Romney acknowledged its reach in early September, when he rearranged his schedule last-minute to speak at two tea party events.

Candidates Michele Bachmann and Ron Paul have enjoyed strong early support from tea party groups and are working to leverage that momentum into victories in states such as South Carolina.

Tea Party Express Co-Chairman Amy Kremer said as the movement continues to mature, tea partiers are increasingly recognizing their activism can change outcomes in Washington. The bloc has become so powerful, she said, that a Republican could not win his or her party's nomination without tea party support.

"We're not going to sit back and just let the Republican party hand us the nominee," she said. "We're going to choose the nominee."

Though tea party leaders maintain the movement will not become a political party and comprises activists of all political stripes, Kremer said most tea partiers expected better from their GOP elected officials.

"We're sick and tired of the Republican Party handing us candidates who are not true conservatives," she said. "And that's what this movement stands for."

The question now is whether the tea party will push candidates far enough to the right during the primaries that it could hurt their chances at winning a general election. The failed Senate candidacies of tea-party-backed Sharron Angle in Nevada and Christine O'Donnell in Delaware may stand as a warning.

The hard-line, no-compromise stance tea party freshmen took on deeper spending cuts in Washington this year in the debt ceiling deal may have hurt the group's standing among Americans. A Wall Street Journal poll from August found the number of voters with a "very negative" view of the tea party had doubled since January, rising from 15 to 29 percent.

In the end the party establishment prevailed with a deal that would make some cuts and put others in the hands of a bipartisan committee of 12 members of Congress.

Kibbe said that unswerving dedication to political ideals could be the tea party's "Achilles heel" in the presidential election, where simply refusing to accept the GOP candidate could force the group into irrelevancy.

"When you're fighting congressional and House seats you can choose your champions, you can choose your battles, you can fight this race and not that race," he said. "When it comes down to the question of voting for President Obama or voting for the Republican nominee, I think Tea Partiers have a challenge, and that's why we've weighed in on this conversation early so we have a better choice."

The early involvement may prove to have heightened importance this election cycle if the Republican Party begins to coalesce around the candidate they feel can best defeat President Barack Obama, said Pat Griffin, a GOP strategist and senior fellow at the New Hampshire Institute of Politics at St. Anselm who is not affiliated in the presidential race.

"Ideology always trumps electability in a primary," he said. "But with each passing day as the president's numbers appear to get worse, Republicans are looking at each other and saying, hmm, we really have a chance to win this thing."

Griffin said that could make members of the party more cautious in choosing a nominee.

"I'm starting to hear for the first time, we've got to be careful about the ideology," he said. "Winning the nomination is only half the game. This is about winning back the White House."

Griffin expects eventually both the GOP party establishment and tea party voters will come around to support the party's candidate so long as they see winning back the White House as a real possibility.

Whatever the outcome, don't count the tea party out, he said. Despite many predictions that the movement had reached its peak, the tea party continues to be a relevant force because it is based upon sustained anger among the electorate, said Griffin.

"The tea party is an organic movement that was largely created by people who were frustrated by Washington," he said. "There's not much you can do about something that's genuine, something that grew organically. You cannot crush that out given the noise coming out of Washington these days."