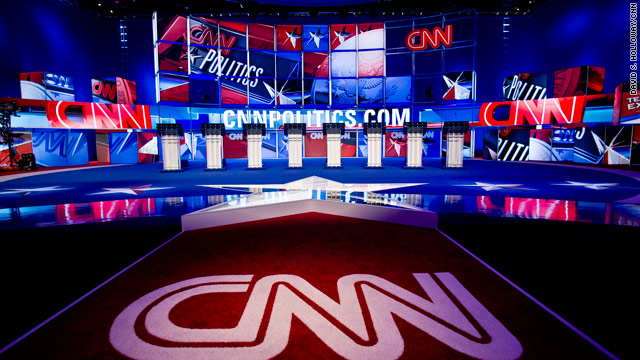 Tampa, Florida (CNN) -- A battle over Social Security launched last week between the top two GOP presidential contenders doesn't show any signs of quieting down as candidates prepare for round two at the first-ever CNN/Tea Party Republican Debate on Monday night.

The debate, being held at the Florida State Fairgrounds in Tampa, will also give the six other candidates on the stage a chance to change what many are portraying as a two-person race between Texas Gov. Rick Perry and former Massachusetts Gov. Mitt Romney.

It all started Wednesday night at a debate at the Reagan Presidential Library in Simi Valley, California. Perry, the new guy in the race and the current front-runner in the national polls, and Romney, the previous front-runner in the GOP battle, sparred over jobs and Social Security.

Perry stood by earlier comments that Social Security is a "Ponzi scheme" and that it was a "monstrous lie" to tell young workers that the 74-year-old pension system would be there when they retire. Romney fired back, saying that "under no circumstances would I ever say by any measure it's a failure. It is working for millions of Americans, and I'll keep it working for millions of Americans."

Perry's team fired back, noting that in Romney's policy book "No Apology," the former Massachusetts governor compared the management of Social Security to a felony.

Then, the Perry campaign started highlighting comments Romney made August 24 in Lebanon, New Hampshire, 11 days after Perry jumped into the race.

"Republicans, like myself, are not gonna cut Social Security or Medicare for people who are retired or near retirement," Romney said at a campaign stop. "And for the people who say we are, they are demagoguing an issue very much that harms America."

The two candidates will once again be standing side-by-side at Monday night's CNN/Tea Party Republican Debate. CNN and the Tea Party Express, a leading national tea party organization, are teaming up to put on the event, with questions coming from the moderator, CNN anchor Wolf Blitzer, as well as from tea party activists, supporters in the audience and voters at locations in Arizona, Ohio and Virginia.

"Rick Perry needs to make it clear in this debate that he stands by his Ponzi scheme caricaturization of Social Security. He can't back off that," said Castellanos, who was a top media adviser to the 2004 Bush-Cheney re-election campaign and to Romney's 2008 bid but is not taking sides this time cycle. "But Perry also needs to make this clear: The 'Ponzi scheme' is what he would fix. Perry needs to reiterate that he has the same position as everyone else on stage: No changes for anyone at or near retirement, but we must save Social Security for those in the 'Ponzi scheme' now."

Monday night's debate could give Perry a second chance to make that point.

"Perry has to continue the momentum largely by showing a bit more polish than he did at the Reagan Library debate. He had energy and proved he belonged on the stage, but needs to help independents feel comfortable with him," says Rich Galen, a Republican strategist who advised Fred Thompson during his 2008 GOP presidential bid. He is the author of Mullings.com, an online column.

As for Romney, who's making his second run for the White House, Galen says he should "try and continue to plant seeds of doubt in the minds of anyone to the left of the evangelical right that Perry can be trusted to be president."

Castellanos thinks that Romney "has to continue to do what he's done in previous debates: Be steady, presidential and remain unswervingly focused on economics: growth, deficit reduction and jobs."

And Castellanos has this prediction: "This debate will be a battle between 'RomneyCare' and 'PerryCare'. Perry imposed a mandate on 12-year-old girls, requiring them to get the HPV 'sex vaccine' whether their parents liked it or not. A lot of Republicans will think that is worse than Romney's health care mandate in Massachusetts."

Bachmann interjected herself into the Social Security discussion.

"America needs to keep its promise to senior citizens, I talk to them all the time. I love senior citizens. I care about them. My mom is 80 years old, and my dad is 87," the congresswoman said in an interview Friday on CNN's "John King USA." She believes that Social Security needs to be reformed, but "we have to keep our promises with senior citizens."

The debate is crucial to Bachmann, who has dropped in national polling since Perry launched his campaign on August 13, the very same day that she won a crucial straw poll in Ames, Iowa. She had strong debate performances at presidential debates in New Hampshire in June and Iowa in August, but she didn't shine to the same degree last week.

"Bachmann must get back into the game," says Galen. "This may be her last chance to stay in the game."

The debate may not be as crucial for Paul, who's making his third bid for the White House. He has energetic and enthusiastic supporters and has little problem when it comes to raising campaign funds, but for some of the other candidates, a strong performance on Monday night could be crucial to driving their fundraising.

"They need to score some debating points so they can generate enough donations to make it to the next debate and, ultimately, to the point where they qualify for matching funds to pay off debts," adds Galen.

But what makes this debate different is its connection to the tea party, a 2 1/2-year-old grassroots movement that calls for lower taxes and less government spending and regulations. The movement was extremely influential in last year's GOP primaries in the midterm elections, and strong support from tea party activists helped the Republicans win back control of the House of Representatives. It's expected that the tea party movement will be just as influential in the battle for the GOP presidential nomination.

"The tea party movement has become a powerful movement in American politics. Over the past two years, we have changed the political landscape of Washington, D.C. Not only have we had an impact in elections, but we have also affected legislation on a level that no one expected," says Tea Party Express chair Amy Kremer.

"Because of these successes, it only makes sense that the tea party would engage in presidential politics. We are not going to just accept what the Republican Party wants to give to us. The people across America are tired of party politics, so it will be the people of this movement that will determine the next Republican nominee."