Witness to history: White House photographer and the images of 9/11 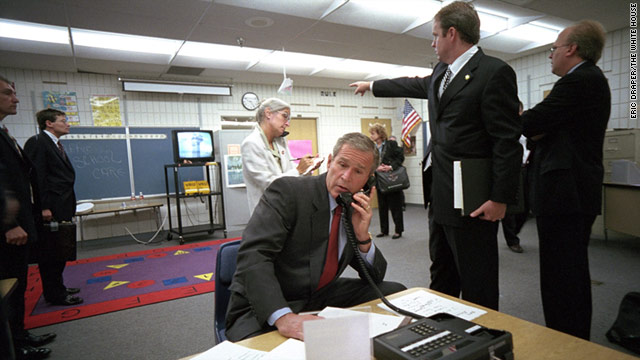 Washington (CNN) -- As the president's personal photographer and head of the White House Photo Office, Eric Draper was with President George W. Bush for nearly every day of his eight-year term, often just a few feet away.

"My job was to document the president, to follow him everywhere," Draper told CNN in an exclusive interview. "But I had no idea what stories, what events would play out ... September 11 changed everything."

Draper, a former newspaper and wire photographer who is now a freelancer based in Albuquerque, New Mexico, ended up at President Bush's side on that fateful day and made some of the most iconic and memorable images of the president as the tragedy unfolded.

He was there in the motorcade, driving to Booker Elementary School in Sarasota, Florida, when press secretary Ari Fleischer first got a "page" on his pager -- "Back then, we didn't have BlackBerrys," said Draper -- alerting the White House that a single plane had hit the World Trade Center.

"I remember the president saying, 'What a horrible accident.' That's what everyone thought, that it was a shocking, one-time, how-could-that-ever-happen accident," recalled Draper.

Minutes later, they knew it wasn't an accident.

Draper was there, in the holding room of the elementary school, as Bush and his advisers first saw the second plane, United Airlines Flight 175, crash into the south tower, hitting it between the 77th and 85th floors.

He was there, in the room, when President Bush saw the twin towers collapse and he was there, days later, when Bush climbed atop the rubble at ground zero in New York, holding a megaphone, and proclaimed "The whole world will hear us soon."

Draper sat down with CNN for an exclusive interview, walked us through several never-before-seen images from September 11 and the days following, and shared how one of the most significant days in American history unfolded: 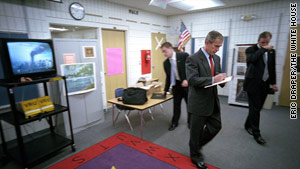 President Bush reacts to live video of the burning World Trade Center at a classroom at Emma Booker Elementary School in Sarasota.

CNN: This photo of President Bush in the holding room at the elementary school in Florida, what is happening here?

Draper: This was literally just seconds after the president left the classroom. And the timing here is pretty critical because there's a clock on the wall, you can see it's around 9:10.

The president was asking questions, trying to get the timing down, what happened in New York. It was tense, it was unbelievable. And then there was the distraction of watching the burning towers on TV. Immediately, I just tried to focus on making the picture. 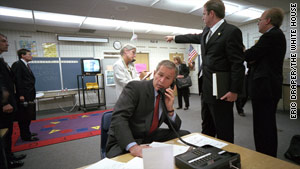 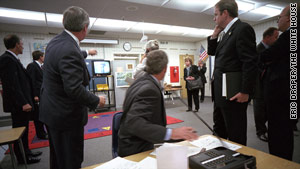 ...as President Bush turns to see the second plane hit the south tower of the World Trade Center.

CNN: And this frame, President Bush is on the phone...

Draper: This was the moment, when the president finally was alerted. We're watching the live screen of the towers burning in New York, and all of a sudden they start replaying the video of the second tower getting hit. ... This was the first time that everyone saw that second plane hitting the tower, the moment of the attack.

President Bush turns around for the first time and sees that image that's burned into everyone's memory.

It was just shocking to see the horrific explosion and knowing immediately that there was going to be a huge loss of life. The roller coaster of emotions really started that day. It started out with shock, then, knowing how many people were in those buildings, it turned to anger, then turned to, at least in my mind, who would do this? 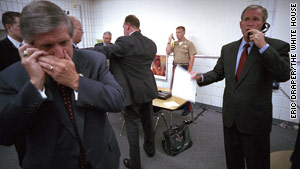 Bush confers on a secure line as "the football" -- the briefcase holding the secure nuclear launch codes -- is watched by a Marine.

CNN: In this picture, I noticed the Marine in the background and the briefcase on the floor. Is that what I think it is?

Draper: Yes. That's the so-called "football" -- the nuclear launch codes -- that the military carries for the president. Right there. On the floor. 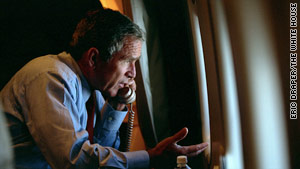 As Air Force One approaches Washington, Bush talks with Vice President Cheney while looking at the smoldering Pentagon. 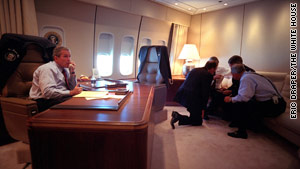 White House advisers plan the route for Air Force One as Bush works in his cabin.

CNN: OK, now you're on Air Force One. What happened once the president was in the air?

Draper: We knew they wanted to get him in the air as soon as possible... I remember walking aboard the plane, and the first thing I heard was (Chief of Staff) Andy Card's voice saying, "Remove your batteries from your cell phones." because we didn't know if we were being traced. I thought, are we a target? I didn't know.

We were hearing a lot of false reports, too. There was a moment when the president came out of the cabin of Air Force One and said, "I hear that 'Angel' is the next target." Angel is the code name for Air Force One.

I also remember those first moments aboard the plane, when the president really tried to rally the staff. He walked out of his cabin and he said, "OK, boys, this is what they pay us for." 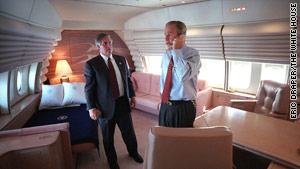 With Andy Card watching, President Bush gives the order to shoot down any aircraft that might threaten an attack on the U.S.

CNN: What's going on here? The president appears to be in intense conversation with Andy Card on Air Force One.

Draper: The timing here is pretty critical. This was around the time when the president made the decision that any aircraft that was threatening attack would be shot down. 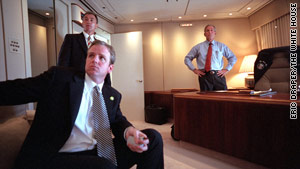 President Bush watches the collapse of the twin towers aboard Air Force One, with Dan Bartlett and a secret service agent. 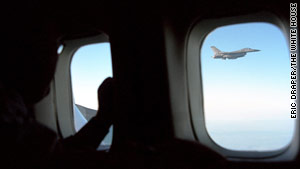 Air Force F-16s fly off the wingtips of Air Force One.

CNN: Did President Bush say much to you that day?

Draper: One time, there was a moment. That's when we're watching live TV aboard the plane. That's when the towers fell.

Just moments after this, this is when we discovered the F-16s escorting Air Force One as we approached Andrews Air Force Base. Everyone was looking out the windows, trying to see them. They were right there, literally, looked like they were touching the wings of the plane. For me, it really hit home, that we were in a war. You could see the F-16s on one side of the plane, then you look out the other side of the plane and you could still see the smoke rising from the Pentagon. It was really a shocking scene. 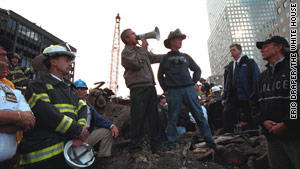 President Bush and retired firefighter Bob Beckwith stand on the rubble of the World Trade Center.

CNN: Now here, the president is in New York, at ground zero. How did that come together?

There was this area set aside for the president to walk over and speak. At the last minute he was handed a megaphone, and the firefighter marking the spot was there, and the president kept him there. He was just there to make sure the president got to the spot, then he was going to leave, but the president said "Stay here."

I remember the firefighter yelling in the background, "I can't hear you." I still get chills when I remember the quote, when the president said, "I can hear YOU, and the people who knocked these buildings down will hear from all of us soon." 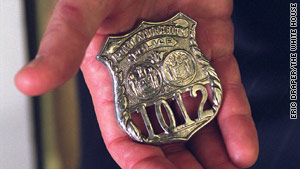 President Bush always kept the badge worn by Port Authority Officer George Howard, who died in the trade center, in his pocket during his presidency.

CNN: This last photo, of the officer's badge, what is this?

Draper: That is the badge that was worn by a New York Port Authority officer who died on 9/11. That badge was found on his body and given to (President Bush) by his mother around the days following 9/11. The president carried it in his pocket as a reminder, he carried it every day. I felt it was very important, symbolically, to make a photograph of that badge. He would always carry it and pull it out to remind people and to remind himself about what happened that day.

Draper: I had it easy because I had a camera to distract me. I had the technical aspects of being a photographer. But at the same time, I was scared about what was happening in Washington, because that's where my wife was, she had just moved to Washington a few days before 9/11.

So when they finally allowed staff to call from the plane later that day, my first words were "Honey, I'm gonna be a little late tonight."