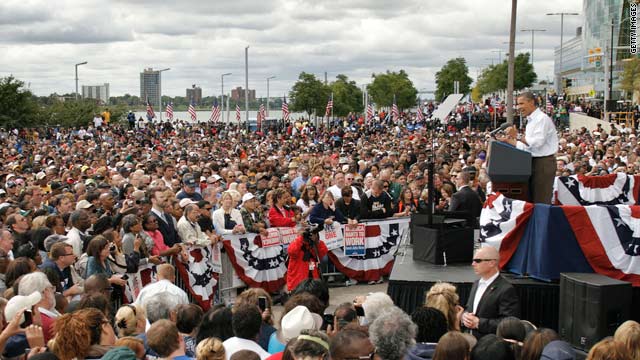 Washington (CNN) -- In a passionate speech before a joint session of Congress, President Barack Obama issued a stern warning to Republicans: Compromise or I'll use it against you.

"You should pass it (his American Jobs Act economic plan). And I intend to take that message to every corner of this country," Obama said Thursday night.

Obama appears to have channeled Harry Truman, who went after what he called the Republican-controlled "do-nothing" 80th Congress in his 1948 presidential re-election campaign, traveling across the country by train, giving speeches to crowds in small towns and big cities.

Obama as Truman has emerged over the past couple of months.

On the flight from Washington to a Labor Day rally in Detroit, Democratic Sen. Carl Levin showed the president a speech Truman gave to union members in that same city on Labor Day 1948.

"And just to show that things haven't changed much, (Truman) talked about how Americans had voted in some folks into Congress who weren't very friendly to labor," Obama told the adoring crowd. "And he pointed out that some working folks and even some union members voted these folks in. And now they were learning their lesson."

"Obama made it clear he was taking a page from Truman's '48 campaign handbook: He would run the kind of gloves-off, hard-punching campaign against Republicans in Congress that energized labor enough to help Truman win re-election as well as recapture control of Congress from the Republicans," Gizzi said.

The nation's 33rd president initially did not have a warm relationship with the Democratic base, which included powerful labor unions, Dixiecrats (Southerners who opposed Truman's pro-civil rights policies) and progressives.

The former U.S. senator from Missouri had been President Franklin D. Roosevelt's vice president and succeeded Roosevelt after he died less than three months into his historic fourth term on April 12, 1945.

"As a president, he did not start out doing well because he was not well regarded because he succeeded this giant in Roosevelt. ... He had his own problems with crony capitalism," said Norm Ornstein, a political scholar with the American Enterprise Institute. "Suddenly, he emerged as this great, feisty fighter against this do-nothing idiot Congress." 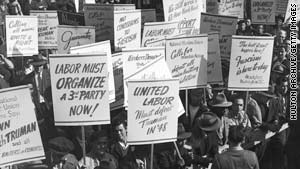 Workers protest in New York in 1946 against President Harry Truman's threat to draft striking workers into the military.

Tough economic conditions plagued the nation as it moved from the World War II economy. The public desire for change was rampant, Ornstein points out, because of work shortages, high prices and inflation. Labor unions went on strike demanding higher wages, which had been held down during the war. Truman, however, drew a hard line, at one point asking Congress for permission to draft striking railroad workers into the military because the stalled trains were at the time the nation's primary means of transporting passengers and goods.

But the relationship turned around when Republicans took over Congress in the 1946 midterm elections.

The swing in control of Congress last year was the largest since that election.

While Republicans were willing to work with Truman on important foreign policy issues such as the Marshall Plan that provided relief for war-ravaged Europe, they were in near lockstep against his domestic policies (known as the Fair Deal), which included a strong civil rights plan, an extension of Roosevelt's New Deal and support for national health insurance.

Jonathan Tobin, a writer for the conservative Commentary Magazine, points out that Republicans thought the public was rejecting New Deal policies. "It was instead a more limited reaction to the postwar situation," he recently wrote.

Ornstein said the same is true for the relationship Obama has with the current GOP-controlled Congress.

"To me, the lessons from the Truman experience are fairly clear: We have once again a Republican Congress that came in with big numbers, in this case out of a dissatisfaction with the process in Washington combined with a dissatisfaction over the economy," Ornstein said. "Republicans came in believing the radical, conservative ideology is what voters were aiming for -- and more confrontation."

But poll after poll shows that the public wants less confrontation, toned-down rhetoric and a spirit of bipartisanship. Obama is listening -- and acting on it.

Truman was the quintessential underdog.

As the 1948 election neared, Truman faced low approval ratings, factions in the Democratic Party and was severely underfunded compared with Dewey.

Prize-winning author David McCullough writes in his biography, "Truman," that money was an enormous problem for the Democrat. 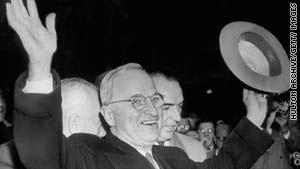 Truman surprised pollsters and pundits when he defeated Republican Thomas Dewey in 1948.

"Talk of the big money behind Dewey was another sign supposedly of just how far out in front Dewey was, how certain his victory -- on the theory that big money never followed a loser," McCullough said. "But to find backing for Truman was nearly impossible. At small White House receptions for Democrats that spring and summer, Truman himself had had to ask for financial help, something he detested, just to get his campaign under way."

That is hardly the case for Obama, whose campaign is expected to bring in a record $1 billion for the 2012 campaign.

Despite the national media writing him off, Truman -- known for saying, "If you can't stand the heat, you better get out of the kitchen." -- was not deterred. On the campaign trail, a supporter once yelled out "Give 'em hell, Harry!" The phrase stuck.

He took his fight against what he defined as a Republican obstructionist "do-nothing Congress" to the people on a cross-country whistle-stop train tour.

"No president in history had ever gone so far in quest of support from the people, or with less cause for the effort ...," McCullough writes. "Nor would any presidential candidate ever again attempt such a campaign by railroad."

At a campaign stop in Denver, Truman told a crowd that Republicans in Washington have "a habit of becoming curiously deaf to the voice of the people. They have a hard time hearing what the ordinary people of the country are saying. But they have no trouble at all hearing what Wall Street is saying. They are able to catch the slightest whisper from big business and the special interests."

Sound familiar? It has become a familiar Obama refrain to voters in speeches across the country.

But there are big differences between the two Democrats. Truman was a feisty partisan unafraid to show his anger. Obama, meanwhile, has operated as a cool, collected, bipartisan wanting to build consensus. In April 2008, then-candidate Obama -- the first African-American to lead a major U.S. political party's ticket -- said, "I have spent my entire adult life trying to bridge the gap between different kinds of people. That's in my DNA." 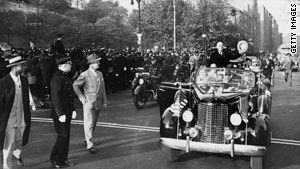 McCullough notes that Truman was at his best "speaking to small crowds and without notes. ... He was described by some of the eastern reporters as a 'feed mill type of talker' and 'excellent indeed' with a small-town crowd." That's highly different than Obama, who draws in huge crowds and almost always uses a teleprompter.

But his political message is having a hard time gaining traction as fears of another recession increase -- and a frustrated Democratic base becomes even more worried that Obama appears too weak for the fight.

"You've got to put the other side on the defensive. I think he's waited way too long. You've got to capture the narrative. He's let the other side capture the narrative," Ornstein said. "You need to frame it (the message) in a way that that kind of behavior is going to be viewed by voters badly and will be punished. And he hasn't done that at this point, anywhere near to make it work."

So will Obama be written off like Truman given his low approval ratings and the proverbial economic weight stacked against him? It's too soon to tell.

Polls this far out from an election do not reflect who eventually goes on to become the winner. And a bevy of things can happen between now and November 2012 -- including an improvement in the economy.

"It's crazy for us ... at this point to be making any projections about what will happen next year," Ornstein said. "It's entirely possible -- in fact you might say likely -- that Republicans are going to nominate somebody who is way out of the mainstream. ... I've got to believe that will have an impact on voters."

Truman's message clearly swayed voters despite the polling and negative attention. While nearly everyone was predicting he would lose, Truman was able to get the last laugh when the Chicago Tribune printed the premature headline "Dewey Beats Truman" on November 3, 1948.