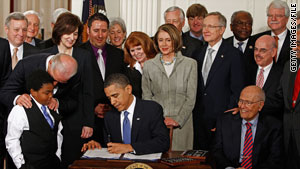 Washington (CNN) -- A federal appeals court has tossed out Virginia's lawsuit against the sweeping health care reform effort championed by President Barack Obama, after the three-judge panel concluded Thursday the state lacks the jurisdictional authority to challenge the 2010 law.

The unanimous decision sets up a certain Supreme Court review in coming months.

"Virginia, the sole plaintiff here, lacks standing to bring this action," said the ruling from the 4th Circuit U.S. Court of Appeals. "Accordingly, we vacate the judgment of the district court and remand with instructions to dismiss the case for lack of subject-matter jurisdiction."

The Richmond-based court becomes the second such federal court to uphold the constitutionality of the Patient Protection and Affordable Care Act, particularly the "individual mandate" provision requiring most Americans to purchase health insurance by 2014 or face a financial penalty. Another appeals court had ruled against the administration.

That "circuit split" ensures the nine justices will take the case, although there is no timetable or deadline for them to decide the matter. But the various appeals coming their way promise to become a major 2012 campaign issue.

The three judges from the 4th Circuit hearing the case -- Diana Gribbon Motz, Andre Davis, and James Wynn-- all were named to the bench by Democratic presidents. They were unanimous in their conclusion the state lawsuit should be blocked on jurisdictional grounds. A separate lawsuit by private Liberty University also was rejected on similar grounds. The school, which bills itself as the largest Christian evangelical college in the world, had claimed the law would allow taxpayer dollars to fund abortions, a claim the Obama administration rejects.

The court ruled on technical grounds, not the larger constitutional questions of whether Americans can be forced to buy health insurance, and whether states are obliged to fund increased Medicare coverage.

"If we were to adopt Virginia's standing theory, each state could become a roving constitutional watchdog of sorts; no issue, no matter how generalized or quintessentially political, would fall beyond a state's power to litigate in federal court. We cannot accept a theory of standing that so contravenes settled jurisdictional constraints," said the ruling.

The state's attorney general, Ken Cuccinelli, said he will appeal the decision, likely to the Supreme Court.

"Not only does the court's opinion reject the role of the states envisioned by the Constitution, it dismisses an act of the Virginia General Assembly -- the Health Care Freedom Act -- as a mere pretense or pretext," Cuccinelli said. "It is unfortunate that the court would be so dismissive of a piece of legislation that passed both houses of a divided legislature by overwhelming margins with broad, bipartisan support."

But the Justice Department applauded the court's reasoning.

"Throughout history, there have been similar challenges to other landmark legislation such as the Social Security Act, the Civil Rights Act, and the Voting Rights Act, and all of those challenges failed as well," said a statement from the department. "We will continue to vigorously defend the health care reform statute in any litigation challenging it, and we believe we will prevail."

More than two dozen other legal challenges to the law are floating in lower federal courts.

The health care reform act was passed by the Democratic Congress last year, with wide support from the president.

There are about 450 components to the health care law. Some will not go into effect for another two years, but some are already in force.

While the two other federal appeals courts had split on the constitutional question of the individual mandate, the 4th Circuit took a different path, deciding on standing grounds. It was clear from oral arguments in May the judges might rule this way.

Virginia officials had argued the Constitution's Commerce Clause does not give government the authority to force Americans to purchase a commercial product like health insurance that they may not want or need. The state equated such a requirement to a burdensome regulation of "inactivity." Virginia is one of the few states in the country with a specific law saying residents cannot be forced to buy insurance.

But Virginia's solicitor general, Duncan Getchell, struggled during argument to justify state intervention on behalf of its citizens -- an issue known as standing. The judges from the bench suggested similar past court cases limited state options to challenge federal laws.

The Justice Department countered the state's argument by saying that since every American will need medical care at some point in their lives, individuals do not "choose" to participate in the health care market. Federal officials cite 2008 figures of $43 billion in uncompensated costs from the millions of uninsured people who receive health services, costs that are shifted to insurance companies and passed on to consumers.

The matter of the standing of states and private groups to challenge the law was one of the questions left unanswered after a panel of the 11th Circuit in Atlanta ruled in August, in a lawsuit filed by Florida and 25 other states, that requiring individuals to purchase insurance was unconstitutional; and a panel of the 6th Circuit in Cincinnati found, in a case from Michigan, that the individual mandate is lawful.

Those rulings also left open the question of whether parts of the law already in effect can continue to be enforced. Those sections currently being administered include small business tax credits, federal grants and consumer protection measures. The federal government wants to know whether these provisions can continue while the issue is under appeal, particularly in the 28 states that have filed suit.

Other questions include: if one provision of the law is found unconstitutional, does the entire act become invalidated; should employers be forced to provide some level of health insurance to their workers; and can religious, moral and other objections to the law be considered?

Among other things, the health care law was designed to help millions of uninsured and underinsured Americans receive adequate and affordable health care through a series of government-imposed mandates and subsidies. The federal government stated in court briefs that 45 million Americans last year were without health insurance, roughly 15% of the country's population.

Critics have equated the measure to socialized medicine, fearing that a bloated government bureaucracy will result in higher taxes and diminished health care services.