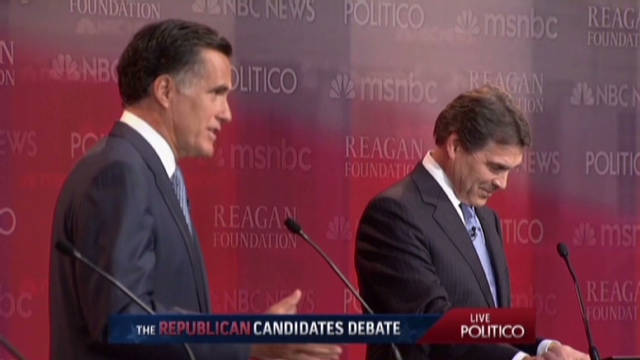 Perry said his opponent had a great record creating jobs in private business, but not so much as a political leader. The Texan said he helped create 1 million jobs in a decade.

Romney countered that Texas had advantages over Massachusetts, including no income tax, the oil and gas industry, and fewer unions.

Romney criticized Perry over his anti-Washington book titled "Fed Up."

In it, Perry refers to Social Security as a "Ponzi scheme" that could make him vulnerable to Democratic attacks in a general election campaign if he wins the Republican nomination.

Romney came under criticism for individual mandates in Massachusetts health care reform, but he said it was needed because too many people were getting taxpayer-funded care at hospitals.

Perry said Texans "would like to see the federal government get out of their business."

In a surprising turn, he praised Obama for the recent operation that tracked down and killed Osama bin Laden.

"I tip my hat to him (for getting bin Laden)," Perry said.

The usually tough-talking Texan added that Obama should be commended for keeping the U.S. detention facility at Guantanamo Bay, saying "America's safer for it."

The Republican hopefuls debated at the Ronald Reagan Presidential Library in Simi Valley, but all eyes were on the new kid -- Perry -- who has rocketed to the top of the polls since joining the race last month.

Perry, a favorite of tea party conservatives who also appeals to the religious right, came under attack at times from his rivals at the debate sponsored by NBC News and Politico. It was Perry's first debate appearance, while the other candidates have faced each other a few times.

"I'm here to tell you, I can get elected," Huntsman said, "I can bring the numbers together to make this successful in 2012 and I can lead based upon where I have been as governor."

Unfortunately, the most recent polling numbers are against him. Huntsman, the former U.S. ambassador to China, is barely registering in recent national polls.