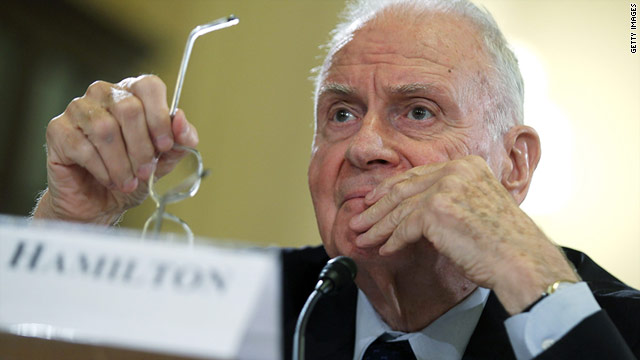 Washington (CNN) -- Ten years after the September 11th attacks, the nation still isn't fully prepared to handle another huge disaster, Lee Hamilton, one of the co-chairmen of the 9/11 Commission, said Thursday.

First responders could still have problems communicating with one another, and there is confusion in some communities about who would be in charge, Hamilton told the House Homeland Security Committee. He urged quick action to solve the problems.

The 9/11 Commission recommended concerted action to fix the problem of responder communications, but the problem persists. "I think it's an urgent question and shame on us, shame on us if we have not solved this problem when the next disaster strikes," Hamilton said.

Tom Ridge, the first secretary of the Department of Homeland Security, said competing measures to deal with the problem are being considered by the House and Senate, while police and fire departments are waiting for some kind of action.

"All they want is a system," Ridge said, "... the opportunity to get voice and data and video over the broadband" in the event of a terror attack, natural disaster or major accident.

The committee's chairman, Rep Peter King, R-New York, said he continues to believe the answer is to set aside a block of wireless telecommunication bands for an emergency communications network.

Hamilton said another concern is knowing who is in charge in the event of a disaster. He called it a "no-brainer" but added that in metropolitan areas, where many law enforcement and rescue groups would respond in a big emergency, the lines of command are not defined.

King held the hearing to assess what progress has been made since the 2001 terror attacks and what still needs to be done. He pointed the finger at Congress -- where he serves -- for not streamlining congressional oversight of the Department of Homeland Security.

"We're sending mixed signals as far as what Congress wants in the area of homeland security, and this fragmentation, to me, is inviting, if not disaster, certainly it's preventing law enforcement and the intelligence agencies from doing the job to the maximum," King said.

We are safer today, but not as safe as we could be.
--Lee Hamilton, 9/11 Commission co-chair
RELATED TOPICS

Hamilton also said the Transportation Security Administration and other entities have done a great deal of work on technology to detect all types of explosives but "we have to accelerate our efforts" to be able to find bomb materials people carry or could hide inside their bodies.

Ridge said the United States has been able to thwart many terror plots, but in some instances it was because the bombers made mistakes and were ineffective. "Luck is not a strategy," he said, warning that the United States must adapt to detect the evolving tactics of terrorists.

Hamilton told the panel much progress has been made in the past 10 years, but more needs to be done: "We are safer today, but not as safe as we could be."