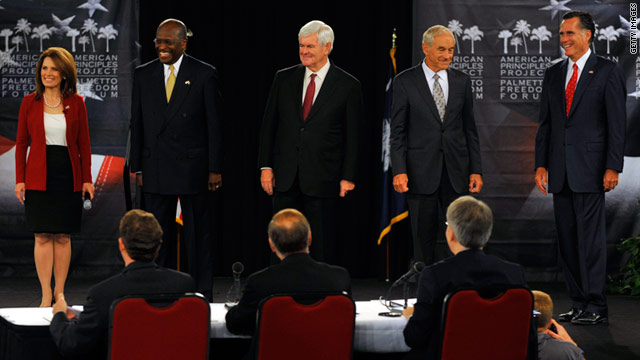 Five of the candidates -- Romney, Paul, Gingrich, Bachmann and Cain -- met Monday at the Palmetto Freedom Forum in Columbia, South Carolina. Perry was scheduled to attend, but canceled to return home to deal with the wildfires burning across Texas.

Perry's entry into the race last month has dramatically altered the landscape, with the Texas governor on the top of the pack according to six major national polls released in the last three weeks. Romney, the former front-runner in the polls, has now be relegated to second place in the surveys.

Giuliani will run if GOP is desperate

The three debates this month and two more next month will be major tests for Perry, who doesn't have a lot of recent experience debating political rivals. While the spotlight will be on the Texas governor, it will also be shining on Romney. The question for the former Massachusetts governor: Does he attack Perry's record, or does he keep his line of fire directed at President Barack Obama?

Bachmann's mission in the debates: Try to grab back the spotlight that Perry grabbed from her on the day of her biggest victory. The Texas governor announced his candidacy on August 13, just a few hours before Bachmann won a crucial GOP presidential straw poll in Ames, Iowa. For the rest of the candidates on the stage, the objective is to show relevancy.

This week's debate is followed by a CNN/Tea Party Express GOP presidential debate Monday in Tampa, Florida, with another debate in Florida on September 22.

A New Hampshire debate on October 11 is followed a week later by a CNN debate in Las Vegas, Nevada, on October 18.