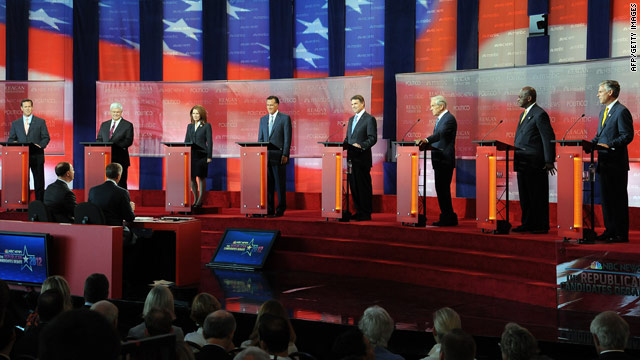 Perry said his opponent had a great record creating jobs in private business, but not so much as a political leader. The Texan said he helped create 1 million jobs in a decade. Romney countered that Texas had advantages over Massachusetts, including no income tax, the oil and gas industry and fewer unions.

Romney criticized Perry over his anti-Washington book titled "Fed Up." In it, Perry refers to Social Security as a "Ponzi scheme," which could make him vulnerable to Democratic attacks in a general election campaign if he wins the Republican nomination.

Romney came under criticism for individual mandates in Massachusetts health care reform, but he said it was needed because too many people were getting taxpayer-funded care at hospitals. Perry said Texans "would like to see the federal government get out of their business."

The Republican hopefuls debated at the Ronald Reagan Presidential Library in Simi Vally, but all eyes were on the new kid -- Perry -- who has rocketed to the top of the polls since joining the race last month.

Perry, a favorite of tea party conservatives who also appeals to the religious right, came under attack at times from his rivals at the debate sponsored by NBC News and Politico. It was Perry's first debate appearance, while the other candidates have already faced each other a few times.

Obama, Bachmann said, has weakened the U.S military presence across the globe and isn't doing enough to ensure Iran doesn't have an arsenal nuclear arms.

Romney contrasted his background as a successful businessman with Perry's resume as a career politician.

Bachmann has seen her support eroded since Perry joined the Republican race on the same day. A campaign shake-up earlier this week saw manager Ed Rollins step back to an advisory role and the top deputy depart.

Rollins insisted there was no serious acrimony within the campaign, but he acknowledged that Perry's entry to the race deflated Bachmann's straw poll victory. Rollins also conceded that the race was now shaping up as Perry versus Romney, with Bachmann in third place.