DeMint is in demand 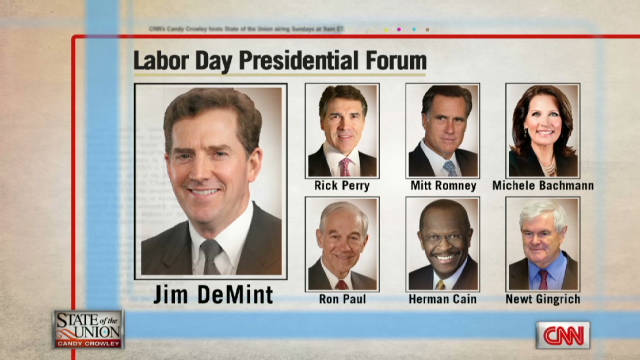 Columbia, South Carolina (CNN) -- South Carolina Sen. Jim DeMint has become a firebrand, capitalizing on a tidal wave of anti-Washington sentiment that makes him the darling of the Republican conservative base and political dynamite to the party establishment.

"I don't have the support inside Washington or even inside my own party," DeMint said last week.

But he's a leader in the new conservative grass-roots movement that includes so-called tea partiers, and his endorsement is one of the most sought-after among 2012 White House hopefuls.

That's why six declared presidential candidates have agreed to participate in his Palmetto Freedom Forum in Columbia on Labor Day.

Former Massachusetts Gov. Mitt Romney initially declined DeMint's invitation, saying he was concentrating on campaigning for the earlier primary in New Hampshire. But after falling behind to newcomer and conservative favorite Texas Gov. Rick Perry, Romney changed his mind, rescheduling events in New Hampshire to travel to Columbia for DeMint's forum.

Getting to Know Sen. Jim DeMint

DeMint's support would be a major boost for any Republican candidate in his home state's pivotal early primary. But according to South Carolina political strategist Warren Tompkins, his endorsement would also have national implications.

The two-term senator raised his national profile in last year's midterm elections by supporting Senate candidates through his PAC, the Senate Conservatives Fund, which raised $9.2 million in 2009-2010, according to the Center for Responsive Politics.

DeMint took hits from leaders in his own party when Republican incumbents and establishment-favored candidates were brought down by his tea party favorites. This summer, he proved to be the one of the most intransigent members of Congress, refusing any compromise with the Obama administration in debt-ceiling negotiations.

Speaking Wednesday to GOP activists in Greenville, he said, "I was lectured in front of the whole Republican Conference saying, 'DeMint, you don't understand how this place works. It's not about principle, it's about the numbers.'"

DeMint to Obama: Put it in writing

While some in the party have questioned his motives, Barry Wynn of Spartanburg, a longtime adviser and treasurer of DeMint's PAC, said the senator understands the risk of not toeing the party line and standing up for principle. He said it's a risk DeMint is willing to take.

"He wasn't doing it to be a star," said Wynn. "What he was trying to do was to shift the balance of power in the Senate. So I've never heard a disparaging word about that, except when I'm in Washington."

That sentiment echoes throughout the state. Last week someone told DeMint, "You're the only rational voice in the Senate."

South Carolina political strategist Richard Quinn said a principled stand may not always be the best way to govern.

"Principle is everything, but you have to have some pragmatism with your principles or else you don't achieve any goals, you achieve nothing," said Quinn, who is running Jon Huntsman's presidential campaign in the state.

Huntsman, the former U.S. ambassador to China and Utah governor, and former Pennsylvania Sen. Rick Santorum were not invited to participate in DeMint's forum because the candidates did not surpass the 5% threshold in the RealClearPolitics average of national polls.

In January 2007, DeMint threw his support behind Romney even before he announced his run for president in 2008. That didn't work out too well for either of them.

Once he was a declared candidate, Romney brought in DeMint as his national campaign co-chair, hired a team of veteran consultants, and poured millions of dollars into South Carolina, only to finish fourth in the Republican primary.

According to Orangeburg County GOP Chairman James Ulmer, who was among a small group of party activists on a conference call with the senator about a month ago, DeMint learned the hard lesson about endorsing early and won't make that mistake again.

Ulmer said DeMint told the group, "'I picked a man early who was one of my friends and I endorsed him for president,' and he said, 'He quit taking my phone calls, taking my advice and answering my questions, and that was Mitt Romney.' DeMint also said 'I'm going to wait until at least Labor Day. I may not endorse anybody at all.' He said, 'Please keep your powder dry.'"

Ulmer talked about the phone call at a Monday evening picnic rally in his Democratic-leaning rural county located between Columbia and Charleston. About 140 people had gathered to raise money for the county party and to see DeMint and other local officials speak at Cox Farm, a 240-acre property prime for hunting and massive barbecues.

DeMint had already left by the time Ulmer shared that story. A leading state GOP official who was at the Orangeburg event and on the call confirmed Ulmer's account.

Wynn is responsible for corralling DeMint supporters to heed the senator's advice. The reason for holding back support until after Labor Day, Wynn said, is partly to give more significance to DeMint's forum, but also so the candidates would be looked at objectively.

Supporters were also encouraged to hold onto their money.

"His initial idea (was) to get a group of people together who would not commit until late in the cycle, to make sure if somebody new got into the race that was exciting and we thought was the ideal person, we would have a group ready to go," Wynn said.

Wynn qualified that statement by adding that it has nothing to do with being dissatisfied with the current presidential field.

In an interview on CNN's "State of the Union" on Sunday, DeMint told Candy Crowley that the forum gives the candidates a chance to define themselves "in their own terms."

"And there is no one in the group that I couldn't support as our nominee, and there's no one who would not do a better job than our current president. So I'm very open right now. I'm listening to what they say. I want to find the candidates who understand the principles of American exceptionalism and have the character, the courage, and the confidence to actually lead the greatest nation in the world."

However, there are DeMint loyalists in his home state who still hold out hope that his name will end up somewhere on the ballot.