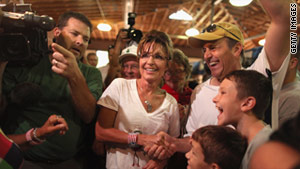 Des Moines, Iowa (CNN) -- Sarah Palin's speech to an Iowa tea party rally on Saturday will come on the three-year anniversary of her memorable address to the Republican National Convention in 2008, when she became GOP vice presidential nominee and an instant conservative darling.

Much has changed since then.

After the GOP ticket went down in defeat, Palin returned to Alaska and shocked Republicans by leaving the governor's mansion the following summer.

After a period in the wilderness (at times literally), she re-emerged and transformed herself into a curious amalgam of tea party firebrand, global celebrity, Facebook prognosticator, reality television star and, of course, potential presidential contender.

Now in the final stages of deciding on whether to embark on that White House bid, Palin plans to use her Iowa speech to revisit the themes of that convention address that made her a star.

Palin will also deliver a sharp indictment of President Barack Obama and accuse him on failing to change the way Washington works, a source familiar with the speech said.

The source said Palin is attempting to burnish her image as an outsider and a reformer, reminding the audience of her record in Alaska and specifically highlighting her battles against what she called the state's corrupt Republican political class that was in cahoots with the oil and gas industry.

Palin plans to unleash a furious criticism of "crony capitalism" and attack the "permanent political class" in both parties: thinly veiled criticisms of Texas Gov. Rick Perry, who has surged to the top of most polls for the Republican presidential nomination.

Political opponents have long accused Perry, who has held some form of elected office since 1985, of rewarding his allies and campaign donors with plum government posts and contracts.

Though she has no plans to mention Perry or any other Republican presidential hopeful by name, Palin will implicitly contrast herself against the current crop of GOP candidates and further define her brand in case she does decide to run.

Palin, who has said she plans to make a decision about the race by late September, will not announce a presidential bid Saturday.

Palin had initially accepted an invitation to speak at the Restoring America event in Indianola, which generated national buzz when it was announced last month.

Palin supporters from across the country are traveling to the state by plane and bus for the speech, and the governor is likely to speak to them in Des Moines on Friday evening at a meet-up organized by the online hub Conservatives4Palin.

But members of Palin's staff indicated this week that her appearance at Saturday's rally was being put on hold because of "planning issues" and concerns that the group behind the event, Tea Party of America, was being "dishonest" about the speaking program.

A Palin adviser said Wednesday that event organizers had been sending them mixed messages about the event, including the question of whether Christine O'Donnell, whom Palin endorsed in her run for the U.S. Senate in Delaware in 2010, would participate.

O'Donnell was removed from the speaking program at the request of the Palin team, one of the rally's organizers, Ken Crow, told the Des Moines Register.

The Palin source said O'Donnell's representatives had misled the tea party group about the extent of the governor's relationship with O'Donnell.

O'Donnell's representatives told event organizers that she would be in Iowa on the date of the rally and would like to come by and "say hi" to Palin, the source said. O'Donnell was then added to the speaking agenda.

The source said O'Donnell aides lied to organizers and said Palin had been communicating via text message with O'Donnell about the rally.

"The governor hasn't spoken to her in a year," the Palin source said of O'Donnell.