Seeking the 'anti-Romney' in the Republican presidential race 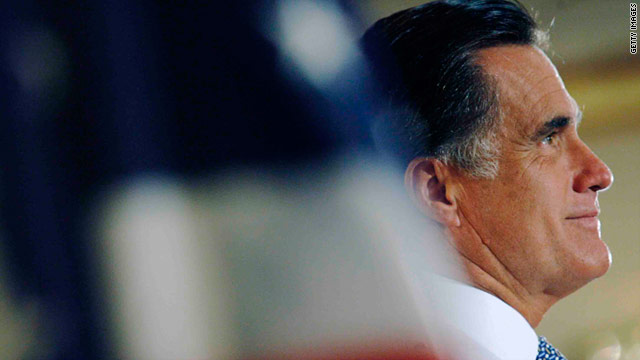 The heading atop Texas Gov. Rick Perry's biography on his campaign website sums up the key issue of the race for the Republican presidential nomination five months before the expected start of the 2012 primary season.

With the right-wing tea party movement playing the most dynamic role in the campaign so far, the GOP competition comes down to which of the handful of die-hard conservative candidates will emerge to battle initial front-runner Mitt Romney for the nomination.

Put another way, who will be the conservative alternative -- the anti-Romney if you will -- to the former Massachusetts governor distrusted as too establishment by the tea party faithful.

"All the candidates are competing to oppose Mitt Romney," said Darrell West, the vice president and director of governance studies at the Brookings Institution think tank in Washington. "Essentially, we're going to have a tea party primary with the winner earning the right to face off against Romney."

Perry, who joined the field in recent weeks, has rocketed ahead of Romney in the national polls. Religious conservatives and tea party fiscal hawks see him as their political savior -- a true Christian believer and proven winner capable of taking the fight to President Barack Obama next fall.

Growing division within the tea party?

But can Perry -- a former Democrat who once backed Al Gore for president -- withstand the coming glare of media scrutiny and opposition research? Can he compete with Romney's fat wallet and disciplined campaign operation? Can he take down a party establishment that historically rewards candidates who have run before and paid their dues?

In short, can Perry unite a powerful conservative movement that remains deeply suspicious of the more mainstream Romney, and keep it united long enough to overcome the former Massachusetts governor's structural advantages?

If not, can the star power of Minnesota Rep. Michele Bachmann or possibly former Alaska Gov. Sarah Palin -- if she decides to run -- galvanize the conservative right enough to overcome both Perry's initial surge and Romney?

Recent polls give Perry the early lead. An August 16-27 Quinnipiac poll shows Perry leading Romney among Republicans nationwide, 24% to 18%. Palin -- not a declared candidate -- is a distant third at 11%, followed by Bachmann at 10%. Texas Rep. Ron Paul, a libertarian superstar, comes in fifth with 9% followed by former Godfather's Pizza CEO Herman Cain at 5%.

Other conservative hopefuls such as former Pennsylvania Sen. Rick Santorum and former House Speaker Newt Gingrich are barely or not even registering, while former U.S. ambassador to China and Utah Gov. Jon Huntsman, a moderate who has garnered much media attention since joining the race, comes in at a statistically insignificant 1%.

An August 24-25 CNN/ORC International Poll offered a similar portrayal. Perry's on top with 27% followed by Romney with 14%. Palin and Bachmann finish third and fourth, respectively, with 10% and 9%. Take undeclared candidates like Palin out of the race, and the top three remain Perry, Romney and Bachmann.

West noted that each of those three could claim one of the key early nomination tests starting in February, with Bachmann taking socially conservative Iowa, Romney winning more moderate New Hampshire and Perry capturing South Carolina, gateway to his native South.

For Romney, the best thing would be a long and divisive battle among the leading conservatives that bloodies whoever becomes his eventual main opponent for the Republican nomination, West said.

"Each of the states after the first three will help narrow the field," he said. "Romney's best bet is if the process is long and drawn out, and if there are lots of competing candidates that divide up the conservative vote. His worst-case scenario is if the field narrows too early in the process."

Before any primary votes are cast, though, the candidates face further debates as well as the campaign grind that also will start to weed out pretenders.

The debates in particular will serve as a kind of proving ground for both Bachmann and Perry to demonstrate they can compete on a national stage.

West said Perry "appeals both to social and fiscal conservatives, and he's going to be very well-funded."

"That's a powerful set of advantages" and the likely reason for Perry's initial success, West said. However, voters outside of Texas, where Perry is the longest-serving governor in state history, don't know him well, West noted.

"His biggest vulnerability is demonstrating substantive knowledge about a wide range of issues," West added. "You don't have to be the smartest guy in the room, but you have to meet some minimum standard so that people think you have what it takes to do the job."

Bachmann received high marks for her performance in initial Republican debates in which she pounded home her red-meat conservative themes of shrinking government, opposing abortion and defining marriage as between a man and a woman.

Perry takes similar positions on the hot-button conservative issues, making their expected showdown a likely battle of style rather than substance.

It looks now like a "face-off between Bachmann and Perry," West noted, adding that "when one of them drops out, the other will inherit the bulk of that support" to gain a "very strong position."

Romney, meanwhile, still must overcome distrust of his policies and background by many conservatives. A major vulnerability is the health care reform he passed in Massachusetts, including an individual mandate that is vehemently opposed by Republicans. His Mormon faith is a problem for some religious conservatives.

In recent years, he has shifted to more conservative positions on both gay rights and abortion rights to try to bolster his appeal on the far right.

Now, with Perry jumping to the lead in polls, Romney seeks to appeal directly to the ardent conservatives who oppose him as an establishment moderate.

His campaign announced Tuesday he would headline a tea party event in New Hampshire on Labor Day.

Hours later, the campaign moved that event to Sunday in a different location and announced that he would attend a Labor Day forum in South Carolina hosted by tea party original Sen. Jim DeMint, an invitation Romney had previously turned down.

In a demonstration of populist conservative enmity toward Romney, the group FreedomWorks says it will protest his planned appearance at Sunday's Tea Party Express rally.

Republican strategists said Romney should continue to focus his attacks on Obama and avoid direct criticism of Perry or other GOP opponents for as long as possible, instead letting them tear each other down.

"If Perry is able to clear the field without committing political suicide, Romney would be forced to take a more active approach and engage Perry in a one-on-one contest," said GOP consultant Ford O'Connell, who worked for Sen. John McCain in the 2008 campaign. "Such a situation would not play into Romney's strengths."