Is deficit fever a political disaster in the making? 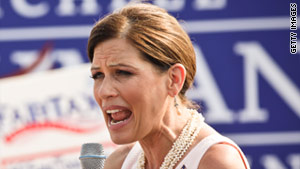 Michele Bachmann joked at a campaign event that Hurricane Irene was a sign from God.
STORY HIGHLIGHTS

Washington (CNN) -- Just as Hurricane Irene was slamming the East Coast, the political rhetoric was approaching category 5 strength in other parts of the country.

Republican presidential candidate Michele Bachmann joked at a campaign event in Florida that the disaster was a sign from God that federal spending was out of control.

"Washington, D.C., you'd think by now, they'd get the message: an earthquake, a hurricane. Are you listening?" Bachmann quipped, to big laughs from the audience.

But there's a serious side to the congresswoman's comments. Budget-cutting fever could have a serious impact on how Washington responds to current and future disasters.

One of the tea party favorites, GOP contender Ron Paul, said Friday that he would eliminate the Federal Emergency Management Agency. The Texas Republican congressman said FEMA's primary function is to bail out homeowners living in risky places such as earthquake or flood zones.

"This idea that the world comes to an end if you don't have somebody at the federal level taking care of you, I mean, it's a natural problem. It's wind. It's a storm," Paul said of Irene. He would have the states handle their own disaster relief.

After last week's earthquake near the nation's capital, House Majority Leader Eric Cantor, R-Virginia, repeated his long-stated position that any disaster relief for shaken residents be matched with spending cuts in the federal budget.

"Those monies will be offset with appropriate savings or cost-cutting elsewhere in order to meet the priority of the federal government's role in a situation like this," Cantor said.

FEMA is making its own adjustments. To make room in its budget for cleanup efforts after Irene, the agency is delaying some rebuilding projects in Joplin, Missouri, where devastating tornadoes struck this year.

"For any projects that have not come in for approval, we're not going to be able to fund those at this point. We're going to postpone those," FEMA Administrator Craig Fugate said at a White House briefing Monday, referring to some efforts in Joplin.

"If FEMA can't fulfill its promise to our state because we have other disasters, that's unacceptable," Republican Sen. Roy Blunt said in a statement.

The criticism from the state's Democratic senator was just as harsh.

"I warned FEMA and assured victims in Joplin that they would not be forgotten after the camera trucks lowered their antennas and rolled out of town. I will fight to make sure that promise is kept," Sen. Claire McCaskill said in a statement.

Mark Merritt, a former top FEMA official and president of Witt Associates, a disaster relief consulting firm, says deficit hysteria is becoming its own disaster in the making.

Merritt argues that no state could absorb the costs of a Hurricane Katrina without federal help.

As Texas Gov. Rick Perry was battling wildfires in his home state in May, he was appealing to Washington for disaster relief. After he was turned down by the Obama administration, Perry lashed out to reporters.

"We're having to pick up 100% of the cost. Historically, the federal government picked up 75% of the cost of disasters like we have here, so there is no consistency with this administration," Perry said.

In Perry's speech announcing his presidential campaign three months later, Washington was part of the problem.

"I'll work every day to try to make Washington, D.C., as inconsequential in your life as I can," Perry said.

Six years ago this week, residents along the U.S. Gulf Coast found out firsthand how Washington matters in a disaster.

FEMA bungled the response to Hurricane Katrina, a lesson agency officials insist they have learned. To many Americans, President George W. Bush's image as commander in chief never recovered.

Over the weekend, the current man in the White House was careful to look hands on during Irene. In his remarks Sunday, President Barack Obama seemed to take aim at critics of federal disaster relief.

"This has been an exemplary effort of how good government at every level should be responsive to people's needs," he said.

Whether the response to Irene is an example of "good government" is still an open question for residents who are still reeling from the storm.